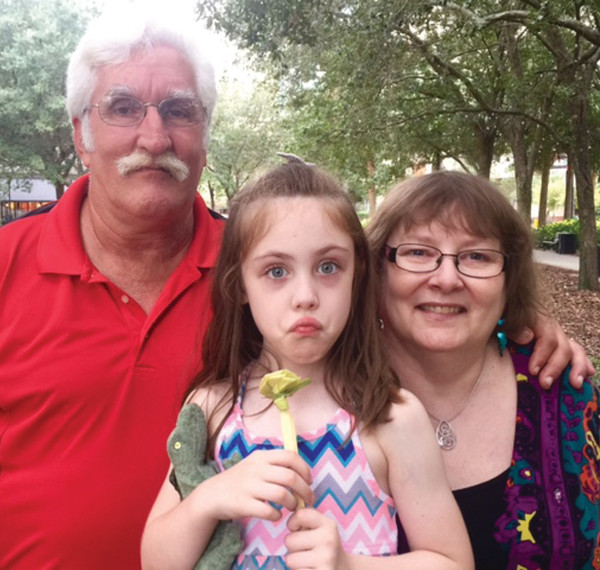 Richard William Pete of Hands Up Ministries with his girlfriend, Tracy and her granddaughter, Chloe in St. Petersburg, Florida.
PHOTO/???

CLEARWATER, FL — Hi everyone. I’m Rick and I live in Clearwater Florida. Homelessness is not necessarily what you think or what you’ve been led to believe. I was your classic middle class American with the family, career and home. And all of it was lost in the recession.

It’s no longer the guy you see pushing a shopping cart around or digging in a garbage can. That’s the old homeless. The new homeless are families and veterans and children and single men and women.

Does any one believe that every homeless person in America woke up one day and said well, I think I’ll give up everything in my life and go live on the street and be a drug addict or alcoholic? Of course not. Something happened to them.

When I was homeless I was told that I was lazy and stupid and my life really didn’t matter.

In 1980 I graduated with my masters degree in economics and I carried a 3.8 gpa for five years. No one can afford to predetermine who a homeless person is.

Second issue. Violence against the homeless. Three of the past four years Florida led the nation in this category. In those three years, over 300 homeless people were systematically attacked resulting in 180 deaths. Every month in America at least one homeless person will killed for no other reason then the fact that he or she was homeless. If any other group was targeted like this their would be a national outcry. But the homeless are still the one group that is safe to hate. And they prove it every chance they get. Just recently in Jacksonville Florida two 12 year old boys went out and shot a homeless man to death.

What I want to see, is a national homeless bill of rights. Eight states have passed such legislation and we are trying to get Florida on board. I want to see the housing first program go nationwide.

I want the community to look outside of themselves and see how blessed they are to have what they have in life and so many have nothing. It doesn’t cost you a dime to go in community and sit with someone and give them a hug. Who knows you just might change a life. And trust me it will change yours.

For research on homeless issues, search the National Law Center on homelessness; Take Me Home documentary about hunger and homelessness in central Florida; 60 minutes October 1st 2006 Bum Hunting;  Hand up ministries on gofundme for how you can help; for the content of Enact Floridas homeless bill of rights on change.org