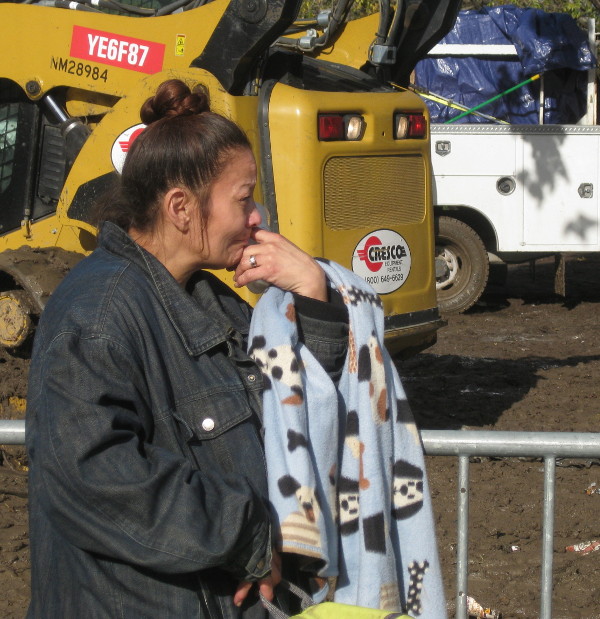 Homelessness is on the rise in America. In Los Angeles, 15,000 become homeless monthly. No longer relegated to primarily urban centers, the homeless population in suburbs, small towns and rural areas is also growing, despite government statistics, which claim otherwise. Tent cities are cropping up across the land. But as the camps and homeless on the streets increasingly become visible, governments pass anti-homeless laws (a recent law bans the homeless from having blankets in public) and send in the police to destroy the camps and the personal property of the inhabitants. Authorities have placed spikes under bridges in Florida to keep the homeless from sleeping there. The homeless are fined, jailed, beaten and even murdered by police.

This is quite a contradiction from the America painted in song as the land of the free. The America from which so much abundance is produced! The America in which workers have produced so many houses that the government now owns more than enough to house every homeless person yet holds them as assets to be sold off to private speculators and developers.

Growing since the 1980’s, the homeless population includes millions of families with children as well as individuals, including a large percentage of veterans. These are refugees of a dying economic system for which corporations no longer have use. They are at the heart of a new class of workers who cannot compete with computerized-robotic production. They are of all colors and ethnic backgrounds. This is the new post-“Great Recession” norm in America where any worker can be thrown into the streets!

The corporate ruling class has for decades painted the homeless as shiftless, lazy, drug addicted, mentally ill, and dangerous criminals, cultivating a fascist culture that creates indifference to our brothers and sisters lying in the streets or rounded up and taken to prison camps. Isolating the homeless thus sets the stage for a fascist police state to control the entire new class of workers that have no stake in this system, and eventually society as a whole.

This ruling class propaganda has been countered by growing resistance. Organizations of the homeless and the broader community of people of conscience have arisen nation-wide to defend their human rights and demand that the government provide housing and basic necessities for everyone who needs them. This unity and public outrage has forced the government to pay lip service to ending and decriminalizing homelessness but the attacks continue.

A system based on the private ownership of the means to produce what we, the workers, need to survive, cannot and will not provide housing and basic necessities to those the corporations can no longer exploit for profit.

Uniting around the program of the “least of these” for food, housing, clothing, all the necessities for a decent life, is the first step in uniting our class politically and creating the basis for a new cooperative society where everyone’s needs are met. Only then will these words from “America the Beautiful” ring true:

O beautiful for glory-tale
Of liberating strife
When once and twice,
for man’s avail
Men lavished precious life!
America! America!
God shed his grace on thee
Till selfish gain no longer stain
The banner of the free!