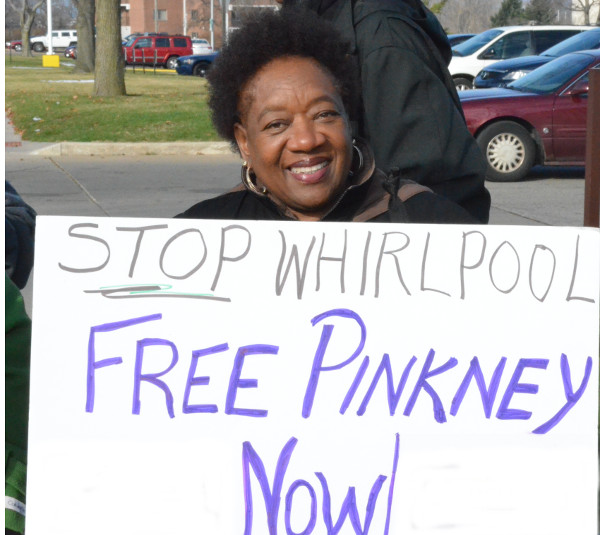 Dorothy Pinkney at protest about the unjust conviction of Rev. Pinkney without evidence. Protest is in front of Berrien County Courthouse in St. Joseph,Mi. Photo/ donated

Editor’s note: This is the text of a speech by Dorothy Pinkney in honor of Martin Luther King’s birthday.

BENTON HARBOR, MI —In 1963, Dr. Martin Luther King shared a prophetic speech to millions of people called, “I Have A Dream.” In it, he quoted the Old Testament Prophet Amos: “But let justice run down as waters and righteousness as a mighty rushing stream.” Dr. King’s dream was to see justice prevail as a mighty flood that washes away injustice, hatred and racism. But now, 53 years later, we find ourselves still in a state of emergency of injustice and racism. Our lives are in jeopardy. We’re fighting a war against Fascism. It is a toxic relationship of corporations and government. It’s a relationship formed from the pit of Hell; an organized criminal enterprise that has caused injury to justice and human rights everywhere. They use any means necessary to destroy humanity with contamination of water—gentrification—false imprisonment—police brutality—homelessness and poverty.

The corrupt government and their in-house slaves are all guilty of committing fraudulent acts against those who oppose them. Like they did to my husband, Rev. Pinkney, an ordained minister of the gospel, an activist for justice and equality, a political prisoner who exercised his political rights as a citizen of Berrien County, initiating a recall petition against James Hightower, who was mayor of Benton Harbor. Because Rev. Pinkney was successful, he became a target of Whirlpool and Berrien County government.

He was accused of changing five dates on the recall petition. He was tried in a Berrien County kangaroo court with no evidence, no witnesses. He was found guilty by an all white tainted jury for a crime that Whirlpool, Judge Schrock, Prosecutor Mike Sepic and the sheriff’s department created to silence his voice. He was sentenced in December, 2014, to 2 ½-10 years.

Since then he has been transferred from prison to prison. Today he has served 399 days and is in Marquette Branch Prison, 500 miles from home. He has been subjected to inhuman conditions of black mold, constantly harassed, threatened and intimidated by racist guards, phone privileges taken away by the warden, accused of smuggling information to me, incoming and outgoing mail is tampered with and he has had several bogus tickets written on him. Each day is a struggle of survival for him.

Many supporters have made phone calls to the Michigan Department of Corrections regarding his safety. PLEASE continue to make calls. Governor Snyder refused to meet with supporters concerning these issues. His trial case is in the Court of Appeals, but there’s nothing listed on their court docket yet.

Let me leave you with this in closing: In Proverbs 29:18 it says, “Where there is no vision the people perish.” Our vision today is to cause this corrupt criminal enterprise system to be exposed, and we demand that the real criminals go to to jail. Then and only then will justice prevail.

One thought on “We demand the real criminals go to jail”