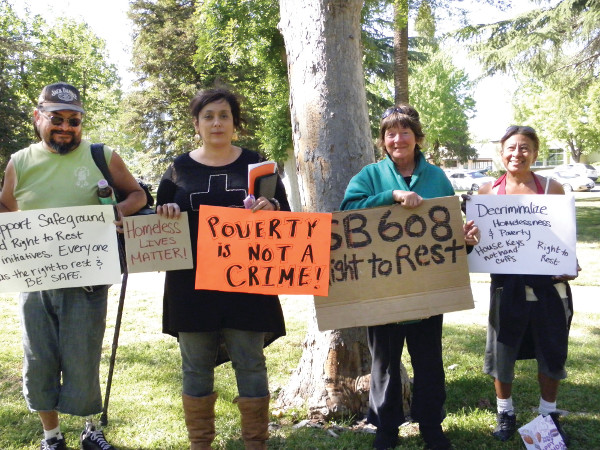 MERCED, CA — Here’s a true story I want to tell you. It all started on September 25, 2015.   Merced, California was having a Homeless Connect event. A lot of us homeless hang out during the day at Applegate Park.  We all help each other and look out for one another.  On that day, one of the women stayed behind to watch our stuff so that all of us that wanted to go could, without dragging our stuff around.

This woman didn’t know that her boyfriend had already been told his stuff couldn’t stay at the park.  So after most everyone left, the captain of the Merced Police Department shows up and starts giving this woman a lot of crap.  The woman told the Captain that she just got out of jail the night before and knew nothing of the law that our stuff can’t be at the park.  His response was if she wants to claim all the belongings there she would receive a ticket and go back to jail.  The ticket would be a violation of probation.  So she backed off.  The Captain then called a city dump truck and within 15 minutes everybody’s belongings were in it.  One woman lost her medication, some lost bikes, clothes, hygiene items.  I had received a ten-pound bag of dog food from someone and had taken it to the park to share with other dog owners.  It was taken along with things like photos, letters, and important documents.

While at the Homeless Connect event, we were able to get legal advice.  The Captain had no right throwing out our belongings.  He violated our rights.  Unfortunately, it was too late. Our belongings were on their way to the city dump.  But for the woman who stayed behind, it was just starting.

Almost every day for the next week, the Captain showed up.  He’d get out of his personal car and start throwing people’s stuff in the trash.  The park hours are 5 a.m. to 11p.m.  He gave people tickets for camping in the park. One girl got one for sleeping on a bench.  One morning the Captain started in on the woman because she was helping a friend bring their stuff to the park.  He said the same crap to her. This time she took the ticket and with the help of another homeless lady, was able to get her story out to the public.  It seemed like as soon as her picture came out in a local newspaper, the woman was arrested and put in jail. She got out within 24 hours.  There was a warrant for her arrest again so she goes back to jail.  She was even on Merced’s Top Ten Wanted list.  She went through Hell just to help others.

I want to thank her so much for what she has done.  Standing up for your civil rights is a must to get the police to stop treating us like we are nothing.  We have rights.  Get to know those rights, stand up for them.  So thank you, friend. This is for you.