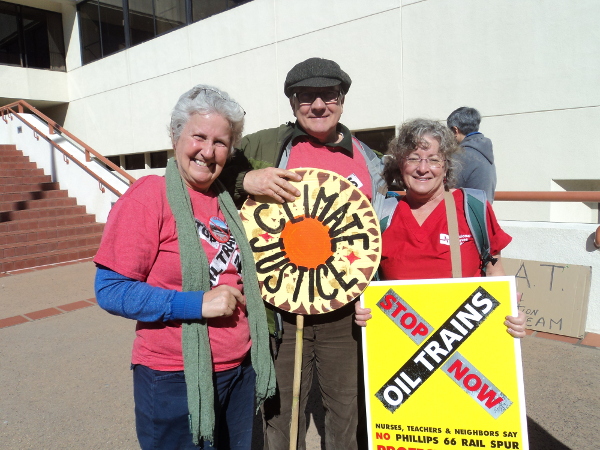 SAN JOSE, CA — Hundreds of people from around California went to San Luis Obispo on February 4 to urge the county Planning Commission to reject Phillips 66 Company’s request to receive Alberta tar sands crude oil by rail.  Phillips 66 proposes bringing five mile-long oil tanker trains a week, each carrying 2.4 million gallons of flammable explosive petroleum, through California, as well as other states and provinces, to a proposed terminal in San Luis Obispo.  It would go to a nearby refinery, sent for further processing in Benecia and then exported to the highest bidder, most likely to Asia.

Public safety threats include oil train derailment and oil spills, fires and explosions.  There were six such explosions in the U.S. in the first half of 2015. Tens of millions of people live, work, or go to school in the blast zones along the way of the proposed route (one mile on each side of the tracks).  In addition, diesel locomotives emit large amounts of exhaust and particulate matter which is very dangerous to public health, especially the young and elderly.

In addition to a huge noontime rally, hundreds of people also signed up to testify against the oil trains. The planning commission was not able to hear them all in two days of hearings, and set another day in February to hear the rest.  A representative of the California Nurses Association, Sherri Stoddard, testified, “There are 1500 nurses in the area who are advocates for health.  We know that not maybe but for sure, the toxic diesel emissions from the trains will pollute the air and cause health problems for children and the elderly, and people with asthma.”

The Phillips 66 lawyer who spoke arrogantly threatened that if they didn’t get permission to build a terminal, they would move the oil in by trucks from the San Joaquin Valley, over the dangerous Pacheco Pass highway.

Bob Sigala, leader in the anti-fracking movement, member of SEIU Retirees Action Team and the California Alliance of Retired Americans, told the Peoples Tribune, “From my experience dealing with the oil companies, you never know if they are telling the truth.  It’s like a shell game.  On the days when there is no wind, when there are chemicals [from the trains] in the air, the chemicals are just going to sit there.  I like it that there are all ages here speaking—I’m here for the future and I’m here to empower seniors, just like I fight for Medicare and Single Payer health care.”  Maria Rodriguez of the Low-Income Self-Help Center, said “They shouldn’t do this—people are everywhere along the route.  We need to save lives.  How many lives have already been lost for oil—look at the war in Iraq.  We don’t want to risk all those lives.”

As detailed in Naomi Klein’s book, This Changes Everything: Capitalism vs. the Climate, and the movie by the same name, the inherent capitalist drive for growth and profit are totally antithetical to the health of the planet and its people.  More and more people are understanding that only a cooperative society, in which essential industrial processes such as energy production are publicly owned and controlled, can elevate the priorities of the health and well-being of the people.