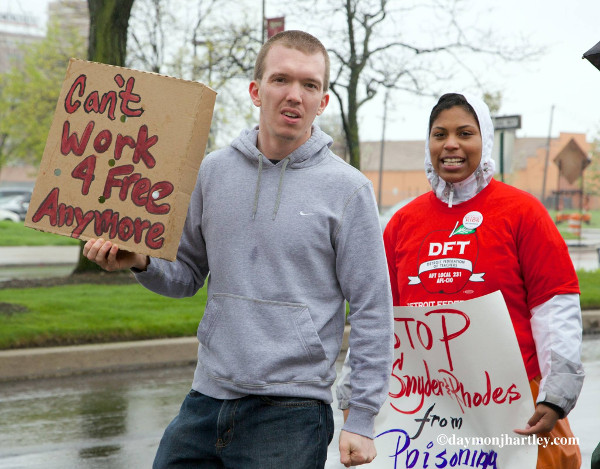 Detroit Teachers refused to report for work in a sick-out over the Detroit Emergency Manager’s announcement that there were insufficient funds to continue paying teachers what they are owed after June 30.
PHOTO/DAYMONJHARTLEY.COM

DETROIT, MI — When the “Emergency Manager” for Detroit Public Schools (DPS), Steven Rhodes, announced there were insufficient funds to continue paying teachers what they are owed after June 30, the Detroit Federation of Teachers (DFT) refused to report for work. Hundreds of parents and students then joined them in a protest outside the Fisher Building, where DPS main offices are.

This action shut down all but a handful of schools in the district for two days. Organized as a “sickout,” where teachers call in sick en masse, the situation as a whole was referred to by DFT members as a “lockout,” since expecting them to work for free is as good as keeping them from working at all.

Other than being paid, the DFT demanded a forensic audit of DPS and for the state to absorb its debt.  According to DFT member Emma Howland-Bolton, that’s because in 1999, the district was taken over by state government via an emergency management dictatorship, which replaces an elected school board. Since then, DPS has been saddled with hundreds of millions of dollars of debt, missing/mismanaged funds, expanded and suspicious administrative, vendor and consulting costs and no mechanism for accountability.  An end to emergency management is among the DFT’s demands.

“There’s no accountability under this system,” says Howland-Bolton. “Someone is making millions and millions of dollars off this. It’s not me. It’s not my students. DPS only spends about $7,000 per pupil and half of that doesn‘t even go to education. It goes to debt service . . . I’ve been teaching for six years and I’m making less money now than when I started . . . $48 million was recently given to DPS as a bailout.  Nobody knows where it went.  Then there’s another $30 million missing from the pension fund . . . This is only possible with no oversight.”

Indeed, before the state took over, DPS was the largest landholder in Detroit, financially stable and even had a budget surplus.  But since then, “emergency managers” have closed more than half of all the schools in the district, accumulated hundreds of millions of dollars in debt and are now balking at paying their teachers for work they’ve already done.

Meanwhile Michigan’s state legislature, which hasn’t pursued the demand for a forensic audit, is capitalizing on DPS’ instability to craft bills splitting the district into two: one district gets a clean, debt-free slate, while the other is responsible for the past debt of hundreds of millions of dollars, keeping it vulnerable to continued dismantling and privatization.

For Howland-Bolton, it’s about the students.  “Seeing them legislate away education is so horrible when you’re hanging out with these kids,” she says. Despite the struggle facing them, it’s that concern for their students’ well-being that pushes the DFT to continue fighting. “I’m blown away by our membership,” she says.  It was the grassroots membership, not the official leadership, that organized community meetings, carried out the sickouts and introduced the people’s demands into the conversation. With their will for a strong school district measured against those capitalizing on the situation, the teachers, parents and students of DPS are struggling to win.