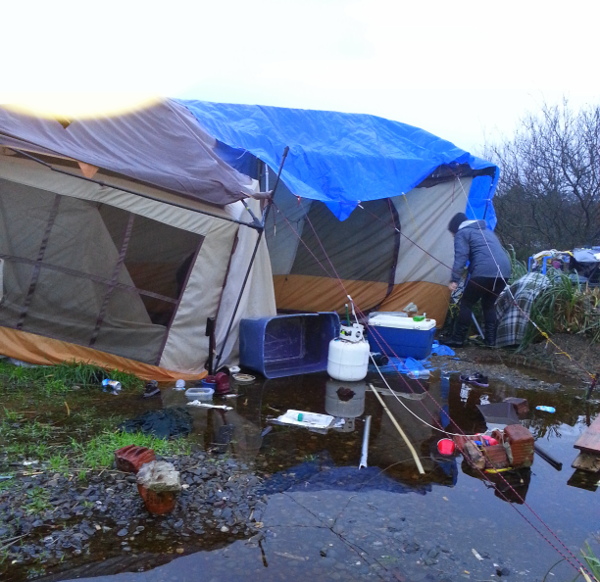 A makeshift tent in a cold, wet, marsh in Eureka, CA where up to 200 homeless people lived before their encampment was destroyed by police in May.
PHOTO/KATHY SRABIAN

Editor’s note: On May 2, an estimated 50 officers from the Eureka, CA Police Department tore down a homeless encampment of around 200 people who were living in a cold, wet, marsh, destroying their community. People driven out were seen lining the streets of Eureka, crying, carrying everything they owned, pushing bicycles and carts. The Eureka police chief vowed to arrest anyone who returned to the campground. In the following article, Kathy Shrabian writes on the website “Redheaded Blackbelt,”in December, 2015, about the immoral conditions under which human beings are forced to live.

I need to break people’s hearts. I need to share with them the cruel horror of the marsh. It is the coldest, windiest, wettest place around here and yet this is where our homeless are pushed into. Well, EPD [Eureka Police Department] does not tell them to go there exactly, but they do say it is the one place they will not enforce the no camping laws.

I have walked through there offering to take people out to the shelter or the rescue mission. No takers. They will not leave behind their dogs. They will not be separated from their partners as the Rescue Mission requires. Some have had very bad experiences with shelters. One woman said she was raped. Even though it did not happen up here, she protects herself by never entering another ‘shelter’. And so they stay in the marsh where trails have become rivers and grassy areas are lakes.

The . . . water does go down but tents are left damaged by the winds. Repaired tents usually do not stand up to the next storm.

Many are women. Many are older. Many are tired, broken in spirit by strings of bad luck and poor choices. Yes, there are drugs. Yes, there is mental illness presenting the chicken and the egg effect. Which came first? When the storm hits does it matter? Human beings cold and wet, cold and wetter, then colder, then getting sick, then sick and cold and wet because they are in the worst place, The Marsh.

Dry socks are brought down, blankets, tarps, warm jackets but as long as they stay there these offerings are just the smallest short term patch jobs.

In order to leave the homeless campground, residents often require rubber boots or even waders, according to homeless advocates.

Eureka City Hall has been reluctant to declare a Shelter Emergency but it will be up for discussion at the next meeting. Discussion. Discussion does not keep one dry in a storm but it is a step in the right direction. Many neighbors and citizens are asking the City to help these people, to provide them a safe, a better place to be. We have parking lots more sheltered and better drained than the marsh.