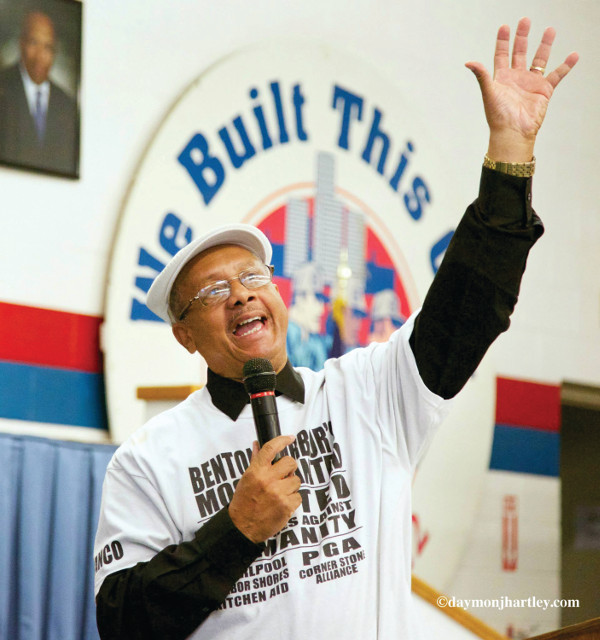 MARQUETTE, MI — You will never ever see me associating with Michael Jordan or Lebron James: they believe in the system, the establishment. They’re rich. I’m poor. But I am here to tell you the system is rigged and corrupt.

Anytime an economic system doesn’t feed, clothe, or house its people, it must be and will be overturned and replaced with a system that meets the needs of the people. We must stand up and demand the government serve the people’s interest and not those of the corporations.

I was charged with five counts of forgery on a recall petition and then convicted by an all white jury that was motivated by something other than the truth. But the problem here is bigger. I was convicted with no evidence, no eyewitness, no confession. The only thing the jury had was the rigged jury system, the government, and Whirlpool, the corporate giant calling the shots.

I was convicted by this rigged system, which feeds its listeners the stale bread of hatred to keep everyone divided and spoiled of racism. It is a system that won’t protect the lives of its own citizens seeking justice if you are poor—whether black, white, brown, red, or yellow. It’s me today. It’s you tomorrow. It’s not one thing, it’s everything. The poor—black white, brown, red, or yellow—cannot passively accept this evil and stand on the sidelines of the struggle for justice. It is a fight for us all.

I was one of the first to speak out about the emergency manager law, which allowed non-elected people to take over cities and school districts, replacing local officials, selling public assets, privatizing public services, dismantling collective bargaining agreements, and more. They are dictators in the service of the corporations. Between 2010 and 2014, Benton Harbor had two different Emergency Managers. They stripped the elected city officials of their power and locked them out of their office.

The emergency managers went from city to city throughout Michigan taking control. This includes Flint, where residents accuse Gov. Snyder, the emergency manager, and other state officials of poisoning a city of 100,000 with contaminated water and then requiring payment. The city, under a state-appointed manager, switched from Detroit water sources to the Flint River water, but did not add corrosion control, causing lead to leach from old plumbing.

It is imperative that the atrocity unfolding in Flint sharpen our understanding of the true nature of the corrupt corporate power structure in this country. This includes the whole damn criminal justice system which is corrupt from top to bottom, and which is designed to destroy the poor—blacks, whites, brown, red, yellow and all others.

The attack on democracy in Benton Harbor and, around the country, shows that the corporate power structure is determined to crush anyone who stands in its way.

We encourage reproduction of this article so long as you credit the source.
Copyright © 2016 People’s Tribune. Visit us at http://peoplestribune.org