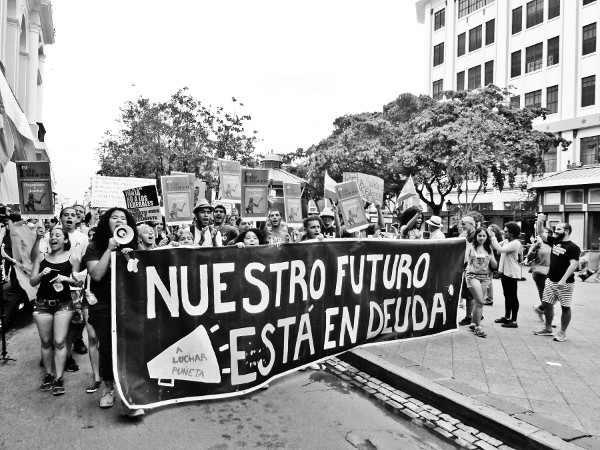 May Day March in Puerto Rico against the country’s emergency managers’ policies. The banner in the photo says, “Indebtedness is our future.”
PHOTO/PEDRO ANGEL RIVERA

Editor’s note: The draconian new law this article discusses is being debated in the legislature.

SAN JUAN, PUERTO RICO — Financial crisis and an un-payable debt have become the ideological media propaganda regarding the social and economic problems that cage Puerto Ricans within our colonial archipelago.

According to recent news reports, the notorious International Monetary Fund, a financial henchman of indebted countries throughout the world, Puerto Rico should look at itself in the mirror and see a future of  “diminishing jobs and increasing migration.”

Facing a panorama of decreasing economic growth for the next five years, following a steady economic recession since 2006, local economist Vicente Feliciano, a hired gun at the service of financial capital, has shamelessly declared that, “It is best to face a horrific end than to choose an endless horror.”

What could economist Feliciano and the rest of the hired guns like him possibly mean when parroting such an apocalyptic commentary? Feliciano and other servants like him are referring to the economic prescriptions announced by the Puerto Rico Oversight Emergency Moratorium and Finance Rehabilitation Act, ironically known as P.R.O.M.E.S.A., which means, “promise” in Spanish.

P.R.O.M.E.S.A. “promises” a scenario that is even more horrific than the one already caused by venture finance vultures in cities like Detroit and Flint. Puerto Ricans are desperately migrating to the U.S. mainland in search of better opportunities, trying to escape the economic hurricane unleashed by the mortgage bubble burst which left millions of families homeless eight years ago. Eight years, the same age of a child whose school will be closed by P.R.O.M.E.S.A. as soon as it begins to deliver it’s financial prescription for Puerto Rico.

Finally, this infamous emergency financial control board will require complete control over the budget decision making process, leaving the colonial government of the island with only the ceremonial power to implement austerity plans outlined by the U.S. plutocratic dictatorship and its Puerto Rican junior partners, which means even less political autonomy than the one obtained by the Puerto Rican government in 1952. Hence, P.R.O.M.E.S.A. vows to formalize the plutocratic financial dictatorship over all vital aspects of Puerto Rican life since the U.S. Federal government sent its army to invade us in 1898.

Facing such a naked political disenfranchisement leaves the Puerto Rican people on the island with very little, if any, power within the current governmental system. A growing number of Puerto Ricans are beginning to ask, why should we vote for a government incapable of making the most basic policy decisions? How are we going to fight corporate Fiscal Control Boards like P.R.O.M.E.S.A. who demolish national, state and ethnic borders, destroying whatever formal democratic powers we still had in places like Detroit, Flint and Puerto Rico? What are we going to do to fight and organize against this growing neo-fascist plot that makes our lives increasingly unbearable?