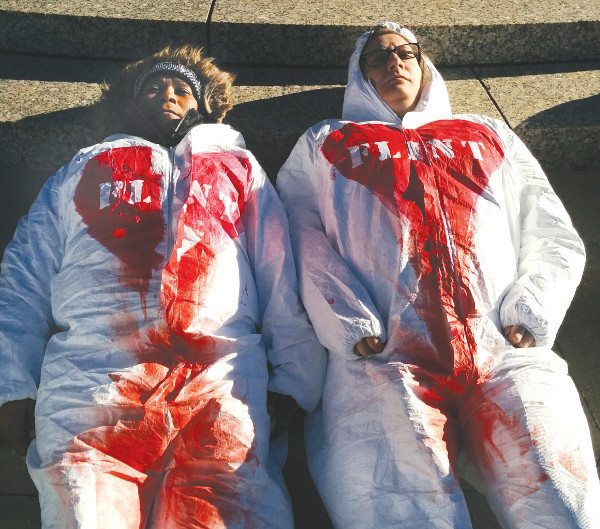 Protesters stage a die in upon the steps of the Flint Water plant in protest of women’s health issues due to the poisoned water.
PHOTO/DESIREE DUELL

The dismantling of democracy is wreaking havoc in Michigan. A corporate dictator law passed in 2011 authorizes the governor to dispatch Emergency Managers (EMs) around the state, wielding unprecedented power by replacing the local elected officials. Governing by edict, EMs can shred labor agreements and sell off public assets like water to corporations. This draconian system ushered in the poisoning of Flint, the massive water shutoffs in Detroit, the ongoing dismantling of public school systems, and the persecution of activists like Rev. Edward Pinkney who fought this dictator law. Michigan was once the center of manufacturing. The law seeks to contain the struggle for survival of workers now driven into poverty by globalization and technological advances. In the brave new world of the emergency manager system—which is now spreading to other states—workers have no rights the corporation is bound to respect. However, as the articles on these pages show, a new dynamic revolutionary social movement is unfolding! Within the unity built lies the hope for a new society where humanity can thrive. — From the People’s Tribune

Mothers, women of Flint ‘Die’ in at city’s water plant 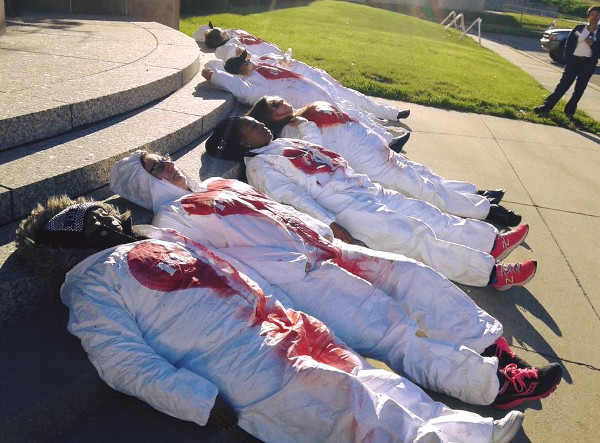 Flint women “die in” to protest the the effects that the water contaminated with lead and other toxis has on their health and reproductive systems.
PHOTO/DESIREE DUELL

FLINT, MI — On May 16, arriving in a packed van, a group of women protesters stage a die in upon the steps of the Flint Water plant. The Flint water crisis has generated an uptick in miscarriages and other women health issues. Many participants dressed in white painter’s suits with red paint to present a visual representation of the damaged caused to women’s reproductive systems. “I shared my story of losing twins during the water crisis because it is essential that people know that this is not a short-term, painless ordeal that we are going through in Flint,” said Nakiya Wakes, a Flint mom. The protesters left under the threat of trespassing charges, but they remained until the 20-minute performance activity was finished. The women want the problem solved now.

They’re not helping me,’ says man with high lead levels 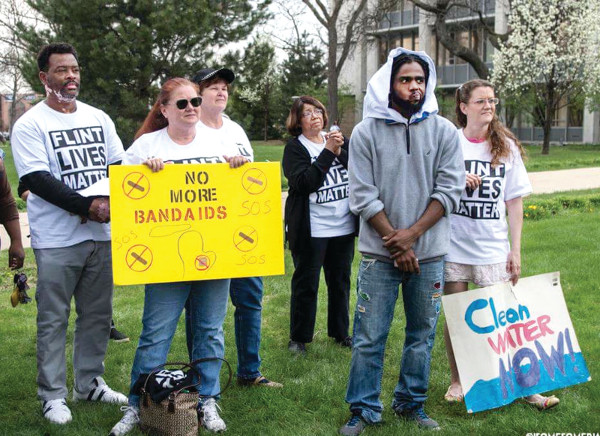 Editor’s Note: The following is a portion of Aaron Stinson’s testimony at the “Two Years Too Long” commemoration rally of the Flint River water poisoning in Flint, MI. Arron is 39-years-old and had the largest recorded level of lead in Genesee County, MI.

My name is Aaron Stinson for all you that don’t know me or may have not seen me. I have the highest lead level recorded in Genesee County. I was tested February 7 and I came in with a lead level of 27. I was retested in March; my blood lead level is 19.1.

I’ve done interviews with all of the local television stations, CNN; they even asked me to come down to the democratic debate and ask three questions on behalf of the people of Flint, as far as how we feel about the water situation. I emailed my questions that were asked on the air.

What concerns me about the whole situation… we’re being told that we can bathe in the water, we’re being told that we can still drink the water, it’s safe to consume, we’re still having people getting sick, we’re still having people not getting tested, we still don’t have the full support… people, we need to spread the word. I’m not going to sit up here and scream at you and talk your ears off. Please share what you know. I’m standing up here looking like a healthy, young, Black male. I’m sick people. Lead is in my body. I don’t know how it’s going to affect me. My healthcare providers are not helping me medically. They’re not helping me in any way.

‘There are no pets in flint!’ resident says