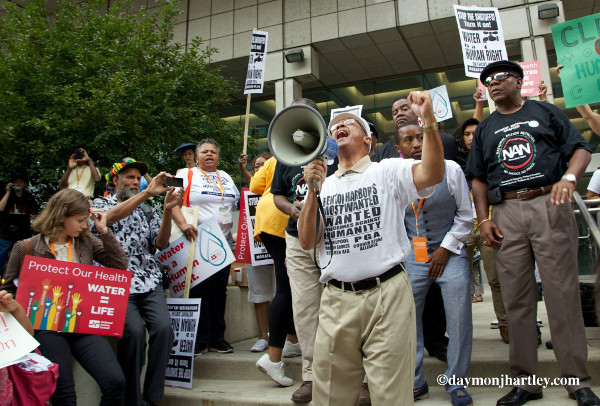 CHICAGO, IL — The People’s Tribune met Rev. Edward Pinkney of Benton Harbor, MI, just after the 2003 rebellion. The police murdered a young man in a high-speed car chase and the town erupted in outrage, shaking the corporate power structure there. Driving the uprising was racist police terror and unjust courts, along with the dire poverty in this industrial ghost town ruled by the giant global corporation, Whirlpool.

As industry left the area or automated, Whirlpool stole the city’s lakefront properties. It was Rev. Pinkney and others who exposed it. When the judges railroaded youth into prison, Rev. Pinkney exposed them. Cities throughout Michigan were restructuring around high tech and “gentrification” which meant more joblessness. Cruel welfare cuts to the poorest of the poor, immoral water shutoffs and new draconian emergency manager laws that eliminate democracy and turn public assets like water over to the corporations were ushered in. The poisoning of Flint is a product of these fascist laws. Rev. Pinkney was among the first to warn people about these laws.

Rev. Pinkney began educating the dispossessed workers in his town about corporate power, drawing them into electoral campaigns to unseat corporate allied officials. These workers, if educated and organized, can inspire millions in the fight for a new world—and the powers that be know it. For this reason, the corporate power structure went on the attack. Rev. Pinkney faced vote fraud trials where no evidence of guilt was presented.
Rev. Pinkney is now in prison serving a 30-month sentence. All his appeals have been denied by the state. Recently a legal challenge by the people of Michigan to the dictator emergency manager law was denied by federal court. The people continue to fight. The fight is about life itself.

The People’s Tribune is honored to have printed monthly articles by Rev. Edward Pinkney for more than a decade. The only month missed was when the prison prevented him from communicating. We will continue printing stories from the people of Benton Harbor and others throughout Michigan and the country. We will do so until the battle against corporate power and a new society is won.
Write to Rev. Pinkney:
Rev. Edward Pinkney, #294671
West Shoreline C.F.
2500 S. Sheridan Drive
Muskegon Heights, MI 49444