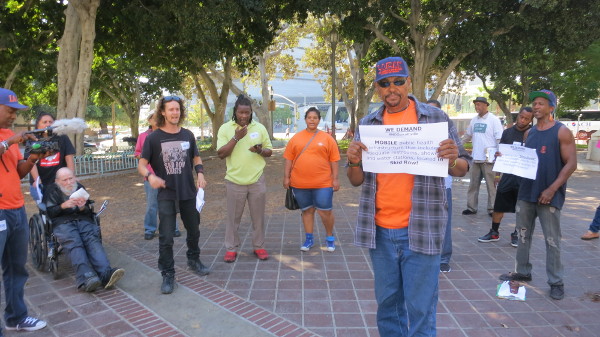 Protest in front of City Hall demanding housing and services for the homeless living on Skid Row.
PHOTO/CHRIS VENN

LOS ANGELES, CA — Eric Garcetti, the Mayor of Los Angeles has instituted Project H.O.P.E, a thinly veiled attack on the homeless population of Los Angeles, the largest in the country. Masquerading as a humanitarian effort to help homeless residents, Project H.O.P.E sets up teams of police, workers from the sanitation department and the Los Angeles Homeless Services Administration to focus on tracking (hunting?) homelessness.

Reports from the San Fernando Valley (the northern part of L.A. City) tell of garbage trucks, followed by squads of 12 policemen confiscating property of homeless residents who are sleeping or resting on the sidewalk. Reports from the mayor’s office celebrate this illegal confiscation of private property by describing it as “more than 500 tons of trash, 20,000 pounds of hazardous materials, and 1,500 sharp objects and needles have been taken off the streets.”

The confiscation of the private property of the homeless, which in reality includes personal IDs, prescriptions, and family photos has become so egregious that the Federal government has suspended federal funding to Los Angeles, until the city provides 1,000 housing units for the homeless.

“Currently the L.A. Police Department leads the nation in shootings. The City is on edge. In 2009, the city launched the Safer City Initiative. This lead to the highest concentration of police in any community, not only in the US, but in the world. There were more police on skid row than in Baghdad. This lead to 24-hour harassment. There are 15,000 living on the streets of Skid Row and 1,500 living in shelters. At this time, the city could have ended homelessness. Instead they advertised that Skid Row was full of addicts. At this time, there were 750 arrests a month; 75% of the arrests were Blacks, 50% of the arrests were disabled. The city was writing 69% more tickets in Skid Row than any other part of the city. The city thought they could arrest their way out of homelessness,” said General Dogon of L.A. Community Action Network.

At the very center of the criminalization of the homeless is the L.A. Municipal Code (LAMC) 56.11. Los Angeles taxpayers fund a $100 million program to address homelessness with over $80 million going to the to the police. LAMC 56.11 stipulates the confiscation and destruction of the personal property of individuals living on the street.

On September 28, as part of a people’s campaign called “Welcome to Garcettiville,” a coalition of organizations from across Los Angeles, including the Los Angeles Community Action Network, Hunger Action LA, LA Human Right to Housing Collective, LA Catholic Worker, Stop LAPD Spying Coalition and others appeared at City Council chambers to demand an end to ongoing homeless criminalization and the immediate installation of mobile public health resources. Mayor Garcetti skipped out of appearing at City Council when he heard these organizations were present.

Mayor Garcetti must provide emergency public health resources and stop the enforcement of laws that largely punish homeless individuals simply for being homeless. This type of enforcement—for largely non-violent, quality of life violations—is not only cruel, but can make it even harder for the cited and arrested residents to get off the streets and into housing programs.

One thought on “Homeless in Los Angeles: Welcome to Garcettiville”