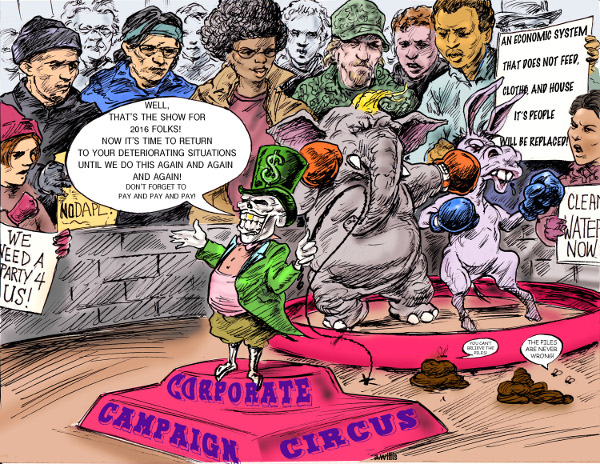 The 2016 presidential election was one of the most divisive in our country’s history. This is no surprise, given the economic, moral, and political crisis we face, combined with Trump’s hate-filled rhetoric. Millions have been made fearful by Trump’s election, while millions of others voted for him.

The hatred and bigotry spewed by Trump has left undocumented immigrants, especially from Mexico, Muslims, people of color, women and anyone who loves democracy living in fear. On a more hopeful note, tens of thousands have demonstrated since the election to reject the politics of hate.

Many people blame white racism for Trump’s election. Others called it a working class revolt. Which one is it? Race or class? The fact is, it’s both. While there is a racist element among Trump’s supporters, it appears the bulk of his backers accepted Trump’s promise to “bring the jobs back” and they believed his masquerade as an “outsider” running against the Wall Street elites personified by Clinton. And while exit polls suggest that the majority of Trump voters were white, they also indicate a small percentage of his votes came from people of color who also believed his populist rhetoric.  (We should also note that the majority of the voters didn’t vote for Trump; Clinton won the popular vote, and more than half the electorate didn’t vote at all.)

This is not to suggest that Clinton could solve our problems. But the elections reflected the economic crisis. People’s lives are being wrecked, and they are looking for solutions. Whether they voted for Sanders, Clinton, Trump, Jill Stein or Gary Johnson, they voted for someone they thought might solve the crisis. In some cases they voted for what they thought was the lesser of two evils.

As the saying goes, “If you don’t stand for something, you’ll fall for anything.” We need to know what the situation is and where we’re trying to go to know which road to take.

The old industrial way of life has been shattered forever. Technology and globalization are eliminating jobs here and worldwide. Millions migrate in search of work. The rising poverty, homelessness, hunger and lack of health care for millions in America is testimony that the economic system is failing.

The crisis can’t be solved within an economy controlled by corporations and billionaires. The corporations won’t support workers they don’t need. At the same time, masses of unemployed people are a threat to the system, so the billionaires use racism and every other divisive ideology to pit us against each other. 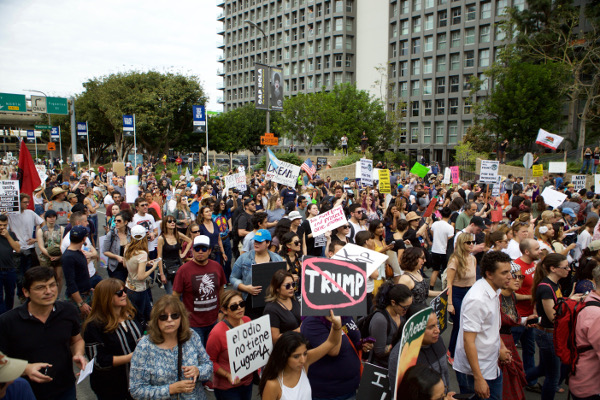 Some of the thousands of people who marched in Los Angeles recently to protest the election of Donald Trump. Millions are rejecting the politics of hate, division and repression and calling for unity and a society that serves the mass of the people.
PHOTO/JOE FENSTERMAKER

Trump’s campaign relied on an openly racist form of fascism rooted in the worst aspects of American history. But both parties are complicit. Both the Democrats and Republicans represent the billionaires. Both parties have the same fascist program: use the government to make the corporations richer; replace democracy with a militarized police state to crack down on those whose labor is no longer needed; and make war to boost the economy. Clinton couldn’t bring the jobs back any more than Trump. Technology is eliminating all jobs. (Only Sanders and Stein had any realistic proposals that could help people, and they were effectively silenced.)

The corporations ultimately dictate government policy, not the president. Still, Trump’s election means a more rapid advance of fascism, and we should be on our guard. His administration will continue using racism and bigotry to keep pointing the finger away from the real culprit: an economic system that doesn’t give a damn about workers no matter their color or ethnic group.

Our society will either be reorganized around the fascist vision of the billionaires, or it will be a society that serves the needs of the people. The new technology allows us to produce unlimited abundance. If the people controlled the economy, the computer and the robot could be used to provide food, housing, health care, education and every necessity to everyone. This would be a cooperative society, where the necessities of life are distributed based on need, not money.

Our next step toward a new society is to get some unity among the people who are being crushed—the dispossessed. They are of every color and nationality, and are already economically united by their common poverty. We have to unite around a program that says that every human being in this country has a right to the necessities of life, and that the government is our government and is obligated to guarantee these things. Our fight for this program can pull our whole society forward and put our country on a path to peace, prosperity, equality and democracy.