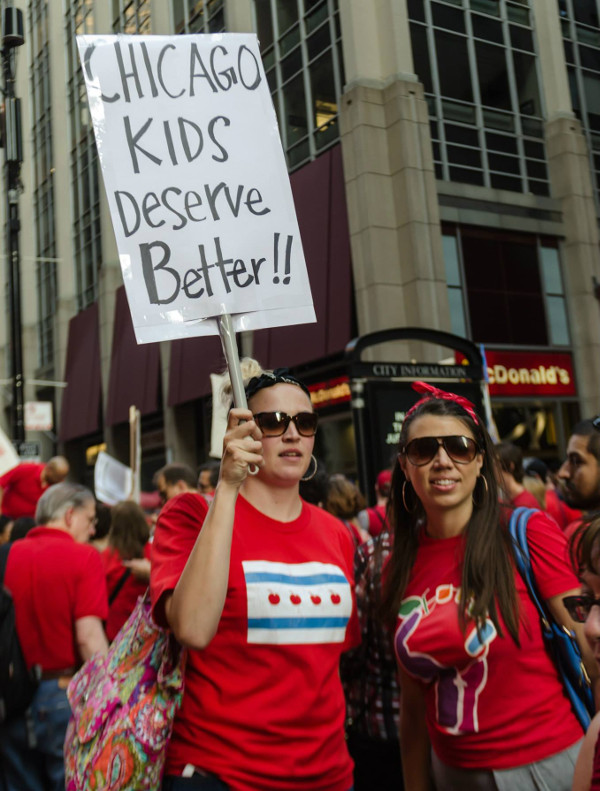 Chicago teachers, parents, and kids are leading the nation in the struggle to get corporate profit out of education and save public education for our children. Trump’s education nominee will lead the fight for destroying it.
PHOTO/SARAH JANE RHEE

Donald Trump’s nominee to head the Department of Education is billionaire Betsy DeVos. DeVos has always held that public education should be destroyed and that schools should be totally run by corporations for-profit. She will aim to defund, privatize and implement the destruction of public schools and teacher unions.

DeVos is a big proponent of dark money, or unlimited corporate funding of politicians. In Ohio, her “All Children Matter Political Action Committee” refuses to pay $5.3 million in fines for violating state campaign finance laws. So DeVos, a person who refuses to pay her debts, will supervise the Department of Education, which oversees $1.3 trillion in student loans. Care to guess whether she will implement forgiveness of these predatory loans?

DeVos also supports and funds school voucher programs, which now exist in some form in about 30 states. The idea is that government grants a family funds that they can transfer to a private or a religious school. This money is diverted from public schools.

The DeVos family of billionaires comes from Michigan, where they helped convert the state into a Right to Work State and impose Emergency Financial Managers, the new face of corporate dictatorship. The results have been horrific for public education.

One Emergency Manager (EM) came to Detroit from Flint after he poisoned 100,000 people with toxic water pollution. When EMs took over Detroit Public Schools (DPS) in 1999, the schools had a $93 million surplus. Today they are $525 million in the red. Gov. Snyder’s plan is to immediately reduce funding by $1100 per year per student to pay off the EM-obligated debt to the banks. The long-term goal is to abolish the DPS.

With DeVos, this kind of attack on public education will be extended across the country. The system is Broke on Purpose! A national attack demands a national movement for national control!

This political revolution begins by holding government accountable at every level, to advance the interests of all people together, not corporations. Government is responsible to guarantee all aspects of human life, not corporate profit. Corporate power cannot be broken without terminating the legal status of public education as a commodity. Education should not be a privately owned commodity sold for profit. Getting corporations out of public education requires nationalizing public education at the federal level.