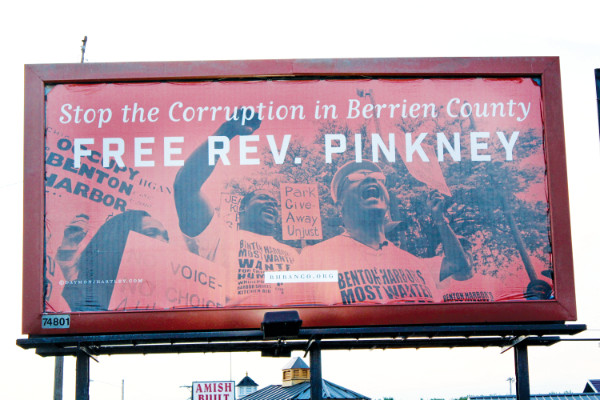 BROOKES/FREMONT PRISON—I was given a potential death penalty—30 months inside the prison system. This with absolutely no evidence, no confession, no witnesses, no crime scene, convicted by an all white jury that was not subject to the truth. It is bigger than the all white jury—it is the establishment, the whole damn system.

The attack on democracy in Benton Harbor, MI shows that all levels of the corporate power structure are determined to crush anyone who stands in its way, including me and you. I have already served 25 months as a result of the Jim Crow trial.  The trial claimed I had altered dates on a recall petition against then Benton Harbor Mayor James Hightower.

The prosecutor and judge both instructed the jury they could convict me with little or no evidence. The prosecution’s case rested on the idea that since I was an outspoken organizer on political and social issues, I must have been motivated to alter the dates on the recall petition.

The prosecution offered no witnesses, no proof, nothing that could convict me. The Court of Appeals decision set a dangerous precedent for the people of Michigan and the country. The decision indicated there is sufficient evidence to convict even when there is absolutely no evidence. The Court of Appeal Judges, Kelly, O’Brien and Fort Hood, all state Rev. Pinkney must have told somebody to alter the dates on the recall petitions with absolutely no evidence to support this false claim.

The hypocrisy of this system has no limits when judges and prosecutors  are dishonest. You better be aware because you could be next, convicted with no evidence.

America is beginning to look more and more like Nazi Germany. There are 2-3 million people inside U.S. prisons; 820,000 on parole, and three million on probation. The U.S. has 25% of the world’s prison population and only 5% of the world’s population.

The scales of justice are unbalanced, especially against the poor and people of color. We must continue to fight against this grave imbalance to insure a humane and just future for everyone. We must confront the establishment, the system, at all cost.

This case was an effort to isolate and silence me against the criminal enterprise of Whirlpool Corporation that has its headquarters in Benton Harobr. We must challenge the rule of the corporations. Let’s make this struggle a victory.