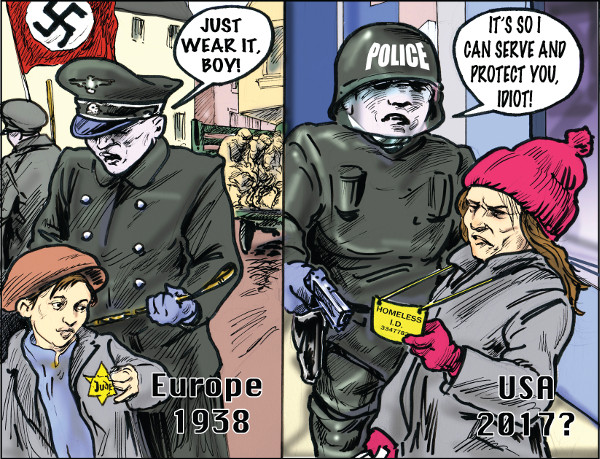 Leading up to WWII, the German government forced Jews to wear identifying badges (the yellow Star of David) as one of many psychological tactics aimed at isolating and dehumanizing them. Refusal to wear the star meant severe punishment and even death. Marking them and scapegoating other groups as different (inferior) to everyone else allowed for their separation from society. This ultimately led to the deportation and murder of six million Jews, the imposition of fascism on all of Germany and the murder of millions more.

Homeless residents in California were recently mandated to wear name tags to get services such as food at a provider. In Florida, the homeless were mandated by both the city and police department to wear yellow wristbands at all times. Refusal to wear one would result in denial of food, and other life-sustaining services. A temporary victory was gained after resistance by homeless organizations and advocates was planned. In California, the homeless still are forced to wear badges.

While “official” government statistics claim homelessness is on the decline, those of us on the front lines know better. Go to any big city and witness the growing tent cities and encampments under bridges, along city sidewalks, parks, any public space, where not only individuals, but families gather to survive.

Gentrification is forcing more families and youth out of housing and into the streets. The “Ghost Ship” fire in Oakland, CA killed 36 residents of an artists’ collective formed around their mutual survival in the face of gentrification there. Rather than exposing the rising cost of rents, and lack of affordable housing, media pundits and others blame the victims.

In Berkeley and Denver, the police remove the tents and blankets of the homeless, including the disabled, as “evidence” of a crime. They are “just doing their job” enforcing laws which ban public camping.

The homeless are demanding an end to the ban and taking their demands to a broader audience.  They reject the rulers’ use of racism to try and keep them divided.

But it is becoming more apparent to greater numbers of us dispossessed workers that the system is the problem. An economy built on everyone having a job in order to buy back what they need, like housing, is incompatible with robotic production.

As more and more jobs are lost to robotics, and the jobs created pay wages too low to survive on, more of us will be homeless. Millions of us are at risk of being targeted as the “other,” rounded up into government camps, or just left to die on the streets and at the hands of the police.

“We, the people,” renters, homeowners, and homeless, need to join together and demand housing for all as a human right.  This is a first step in opposing fascism here. As the demand for our labor decreases, our demands for a government that meets our needs must increase.

We do not need a militarized fascist police state. That’s what the rulers’ want: to protect their wealth at our expense. We want a government that truly is “of, by, and for WE, THE PEOPLE!”

2 thoughts on “Isolating homeless: Step to imposing fascism on us all”