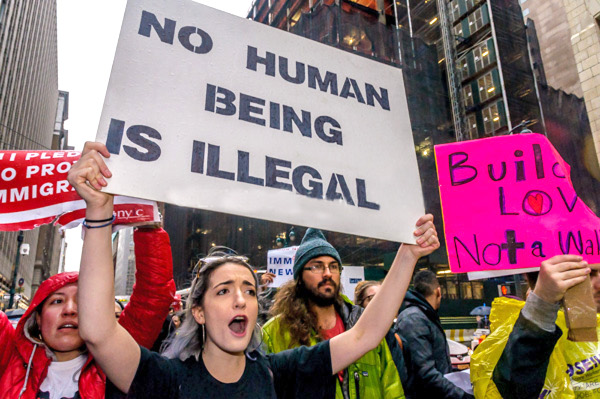 Students at New York University walked out at noon to hold a rally declaring their Campus a Sanctuary Campus. PHOTO/ERIK MCGREGOR

Millions are protesting in defense of our immigrant brothers and sisters and their children who are living in fear of what will happen once Trump takes office. Trump has said he will cut off federal funding to sanctuary cities. He has talked of deporting two or three million immigrants, of having a religious litmus test for immigrants trying to enter the US, and of creating a government national registry based on religion or ethnicity. Attacks on immigrants have gone on under both Democratic and Republican administrations, but now we are seeing a dangerous escalation.

The attack on immigrants, like the attacks on the homeless and on workers of color and others, is an attack on all of us. We have to cement our bond as workers and not allow any section of us to be isolated. The attempt to divide us is calculated to pave the way for the open dictatorship of the billionaires, for a society where no one has rights and no one is cared for. The defense of the immigrant worker is the defense of democracy and our humanity.