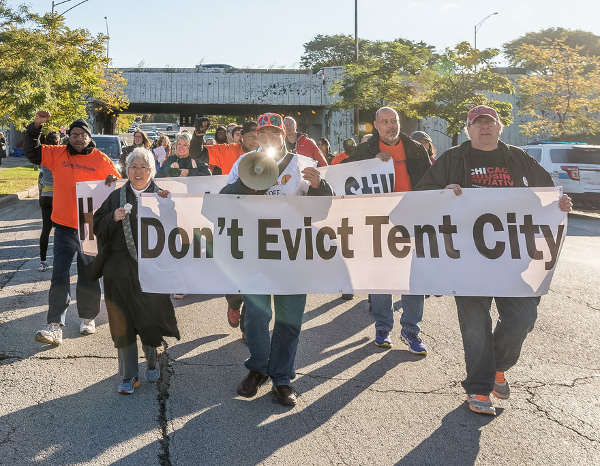 In October 2016, the homeless, camping under Chicago’s Lake Shore Drive in Uptown, and supporters, marched on Lake Shore Drive and set down tents to stop traffic and shut it down. The city threatened to confiscate the tents they live in, just before winter. They aim to pressure Chicago Housing Authority to spend its stockpiled $440 million on housing vouchers rather than have it sit unused, allowing the city to gentrify further.
PHOTO/BRETT JELINEK, OLAFIMAGES.COM

CHICAGO, IL — Another means of attacking the homeless in Chicago, and now the Uptown viaduct encampments, is by conducting frequent encampment “cleanings”. If done at a moderate frequency of, say one every 6 weeks, the cleanings could help keep the viaducts clean. But when done at an unreasonable frequency, like weekly or biweekly, their only purpose can be to harass the homeless and make their lives as difficult as possible.

The cleanings can be a tremendous hardship for residents of the encampments, some of whom are elderly and infirm, but are an undue hardship for all. It requires that everyone take much of a day—or all of one morning, at the least—to move their tents and all their possessions to the embankments of the Drive and wait for the city crews to either power wash—strongly hose down the viaducts—and drive through with a sweeper truck. Or the city might send 20 people, usually convict labor from the Safer Foundation, with brooms and rakes through the viaduct to sweep it manually, which we would have already done anyway. Meanwhile, city officials present might seize property they think the homeless do not deserve to possess (mattresses, chairs, cook grills or anything they don’t consider “portable”).

It can be extremely difficult to carry one’s possessions 50-100 yards and then back again for some elderly and infirm encampment residents, even in mild weather. The “aggressive cleanings”, as city officials call them, were promised to be conducted every week or every other week, whether in rain, sleet, snow or subzero temperatures throughout the winter, just because they hate us.

The encampment cleanings are but another needless impediment heaped upon the homeless to getting ourselves out of homelessness. Encampment residents must postpone doctor or other appointments for cleanings. Recently, one gentleman was certain he had pneumonia, but had to wait until the following Monday to go to the free clinic (he went later to the ER). Job schedules can’t always be worked around it.

On the morning of the scheduled encampment cleaning of Friday, January 6, the temperature at Chicago’s Lake Shore Drive promised to be 5 degrees before factoring in the wind. The residents of the Wilson and Lawrence Avenue viaduct encampments held many discussions that week as to whether to comply with the cleaning orders and move our belongings or whether to refuse.

On Thursday the decision was made to refuse—and to refuse thereafter whenever the temperature went below 40 degrees on the morning of a scheduled cleaning.

Friday, at 8:45 a.m., only one resident of either viaduct had moved his tent and belongings in compliance. The 46th Ward superintendent of Streets and Sanitation then drove through the viaducts and announced that the cleaning had been cancelled after apparently first having waited to see if we would move.

This we considered a victory and our residents’ group, (Uptown) Tent City Voices Heard, went ahead with the scheduled press conference, initially meant to head off our action of refusal, and announced our intended continued refusal.

Whether that prevails is to be seen and a showdown between city government and the encampment is certain and coming soon.