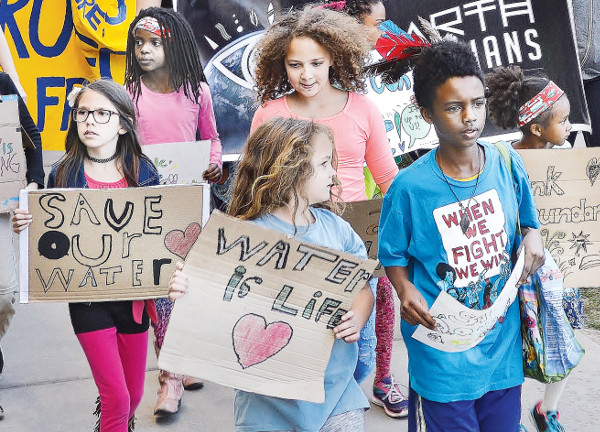 “Earth Guardians,” a movement with youth in the forefront of the struggle for a new world in Denver, CO.
PHOTO/CHRIS GOODWIN, DESROWVISUALS

WASHINGTON – I have been a working research scientist for almost 50 years. I will join the March for Science in opposition to the current threat to science and scientific theory. The dangers faced by the scientific community are inseparably intertwined with the attack on democracy, justice and economic survival. These threats did not suddenly arise with Trump’s election and will not magically disappear when he is gone.

Like most of the scientists of my generation, I am a product of the era which began on October 4, 1957 when the Soviet Union placed the Sputnik satellite in orbit. The US needed to catch up and by the next school year, my elementary school was flooded with pro-science lectures and movies, followed by advanced placement courses in high school, National Science Foundation funding for undergraduate studies, and NIH funding for graduate and postgraduate fellowships.

My schooling and training took place during the Civil Rights, Women’s Rights and Anti-Vietnam War movements and, like most of my fellow students, I was drawn into the struggle to revolutionize the world and to make it a better place to live. My contribution was in the development and use of new cancer drugs. Other scientists working in the physical, chemical, engineering and natural sciences have helped bring the world to the edge of profound revolutionary change, a world where hunger and disease could be absent.

There is clearly a lot more that needs to be done, and it is getting harder to do. When I finished my training and began looking for work, the major question was which job offer to take. Today, my students begin looking for work at least two years before they are ready to leave and are lucky to have more than two offers.

Forty years ago, one out of every three research grant applications was funded. Today, fewer than one in 10 applications are successful. When I began publishing my work, the major questions raised by management concerned originality and progress. Today, the first question is “can we patent this?”

Formerly, there was abundant money for new buildings, high-tech equipment and research staff. This is no longer the case. Increased representation of women and minorities in our profession was a major goal. Today, these goals are still unmet.

When I began studying and then teaching, I did not have to fear successful challenges to basic scientific theories, such as evolution. Today, the attack on the objective analysis of material facts is gaining the upper hand.

Basic scientific research, which is aimed at producing ideas, not commodities, is useless to a system that needs to continue expanding profits. Today, everything needs to be directed at making money, not at making the world a better place to live. Our dreams are in danger and it is time for my colleagues and me to join the march, to defend science and to unite with the active struggles for a better world. I’ll see you in D.C. on April 22.

(The national March for Science in Washington will be on Saturday, April 22, the annual Earth Day observance. For more information, go to www.marchforscience.com)

One thought on “Why I am joining the March for Science”