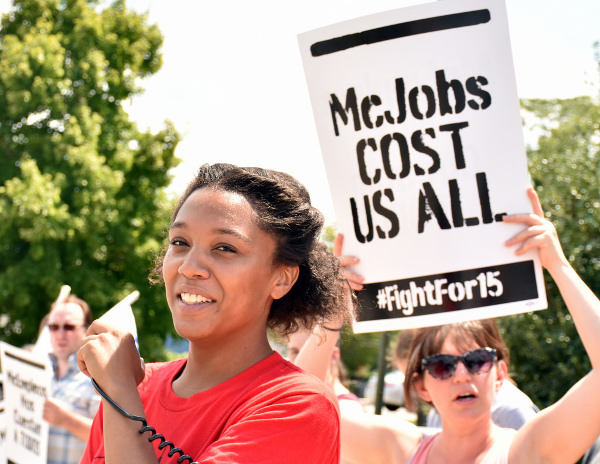 Fight for 15 activists outside a McDonald’s near Philadelphia. A ormer McDonald’s president said last year that if wages for McDonald’s workers hit $15 an hour, they could be replaced with robots. McDonald’s had net income of $4.6 billion in 2016
PHOTO/JOE PIETTE

CHICAGO, IL — May Day signifies a very important moment for the working class. It’s a time to examine our experience and put forward a program and vision of what needs to be done. Even though the historical content of May Day has been lost to most in the US, it’s still an important day throughout the world. In the US, the immigrant marches of 2006 brought it back to the US.

The process of the dismantling of the infrastructure of capitalism, including the workers’ organizations and institutions, began in the 1970s. This saw the reversal of what you might consider a society engaged to solve society’s problems to one where society’s accumulated wealth has no responsibility to the working class.

Under Ronald Reagan, George W. Bush, even the Clinton administration, and now under Trump, this process is going to a new level.

During the Reagan era, a section of the working class adopted the ruling class’ criminalization of the youth as our principal problem. And a section of the trade union movement came to the side of Reagan. In this way, the workers were distracted from what was really taking place. Capitalism was being dismantled and reconfigured in a way to allow unlimited profitability by moving work globally.

This shift left a vacuum. The US worker, who in the past was the motive force of creating the wealth of society, was left jobless. Gone were the opportunities that the exchange of commodities and the national market provided.

So, we find ourselves in a particular moment today where the social consequences of these economic and political developments are reaching a higher and higher level. This May Day, we have to examine what we must do differently. What did we learn in the last 40 years? What worked and what didn’t? This is our challenge.

Our message is the same for every sector of the workers—to those who feel under the weight of domestic violence to the inequality in the workplace; to the African Americans who feel the pressure of the potential killing of their children in the street and to the workers in the Rust Belt areas in West Virginia, Pennsylvania, Ohio, Indiana, Wisconsin, Illinois, Michigan, to the undocumented traveling sometimes thousands of miles to try to stabilize their family and survive. It’s to say: We are the workers who built the dams, electrical grid, interstate system, car manufacturing, and the ability to go to the moon. Our labor accomplished the technological wonder in the US, and now we’re being cast out of this system?

So it’s time for us to design a new way of operating.

Our challenge today is a vision for the future. Today, the battle is for the survival of society, our communities, for a future for our families, or whether there will be a future. That has to be answered by concrete practical steps towards something, not against something.

This is what we need this May Day—to start that visualization of what do we want and what are we fighting for.

One thought on “2017: The significance of May Day”