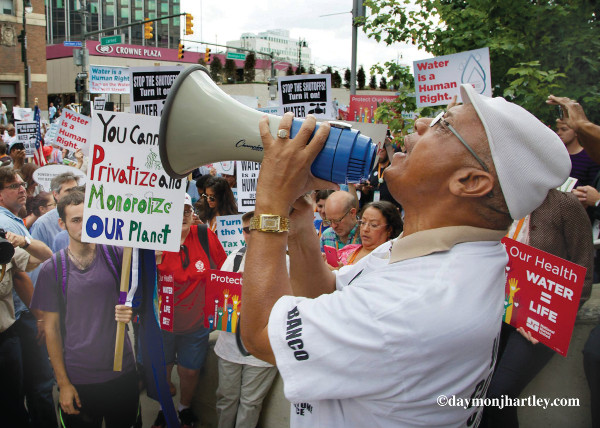 Rev. Pinkney, imprisoned on phony vote fraud charges resulting from his leadership in an effort to unseat a Whirlpool-backed mayor, speaking at a Detroit rally several years ago to turn the water back on for Detroit’s poorest families.
PHOTO/DAYMONJHARTLEY.COM

Rev. Edward Pinkney, incarcerated for fighting the corporate giant Whirlpool on behalf of the poorest workers of Benton Harbor, has without fail written a monthly column for the People’s Tribune for the last 15 years. This month the reverend asked the People’s Tribune to say a few words about our experience participating in the Benton Harbor struggle and helping to shine a light on its political significance for all of America

The People’s Tribune met the Pinkney family (Rev. Edward and Dorothy) after the 2003 Benton Harbor uprising over the senseless police killing of the young Terrence ‘T-Shirt’ Shern. The uprising was a harbinger: it shook the corporate power structure in the region. It was a response to the poverty, racism, wanton police terror, murders and jailing of its youth. Underlying it was the automation and globalization that had destroyed industrial jobs and devastated this once stable working class town. Suddenly the people had no future.

Around this time, the Whirlpool Corporation (that dominates the region)[, along with local, state and federal governments run by both parties, worked together to secure the corporate takeover of the town. Once industry declined, a grand redevelopment plan began, starting with the theft of a cherished lakefront park. The aim of the plan was to turn the town into a profitable playground for the rich. It included the driving out of the poor.

This same process was occurring throughout Michigan. Gov. Rick Snyder launched an undemocratic new form of rule as part of the corporate takeover of the state. Called the Emergency Management system, state appointed “dictators” came into Michigan cities, breaking union contracts, destroying public schools and handing public assets over to corporations and speculators. Local elected officials were shoved aside. Democracy was denied.

The problem the corporate government faces is that the dispossessed workers now number in the millions. The corporations have to prevent people from uniting around their common interests. The successful statewide vote to stop Michigan’s dictatorial emergency management system was a signal of the danger the corporations faced. The movement kept growing.

Rev. Pinkney warned about the growing dictatorship and his organization BANCO ran electoral campaigns to unseat Whirlpool’s people in local office. The government lashed out, arresting him on phony vote fraud charges to silence the movement. No evidence was presented at his trial, which saw the poorest of the community testify in his defense.

Today, a police state in the service of the corporations is on the rise in America to stop the movement for water, healthcare, education and other basic needs. This is why an uncompromising leader of the people like Rev. Pinkney is so key. He and the corps of leaders rising up today are leading the struggle forward. Like Rev. Pinkney, they are arousing the people with a vision of a different society. A movement of millions that is clear on where it is going cannot be stopped.

Editor’s note:  As we go to print, the Michigan Supreme Court has issued an order which Rev. Pinkney’s lawyers discuss below. Please be aware, also of other good news: Rev. Edward Pinkney is scheduled to be released from prison on June 13, after serving 30 months!

“The Order of the Michigan Supreme Court for oral argument on whether prejudicial evidence was admitted at Pinkney’s trial and whether the statute is valid is good news. The first would get hima new trial, which they probably would not pursue because he has already served his sentence. The second would dismiss the charges.” — Hugh M. Davis

“It is clear that the Michigan Supreme Court has shown interest in the two issues it specified in the order. The first issue, involving the introduction [into the trial] of Pinkney’s political and community activities that went beyond the recall effort of the former mayor, should be of great concern to all— even to people who do not support Pinkney and are against his political and social positions. A great deal of that political and community activity was critical of local officials and a local corporation. The use of this First Amendment activity to obtain a conviction is very disturbing.” — Tim Holloway