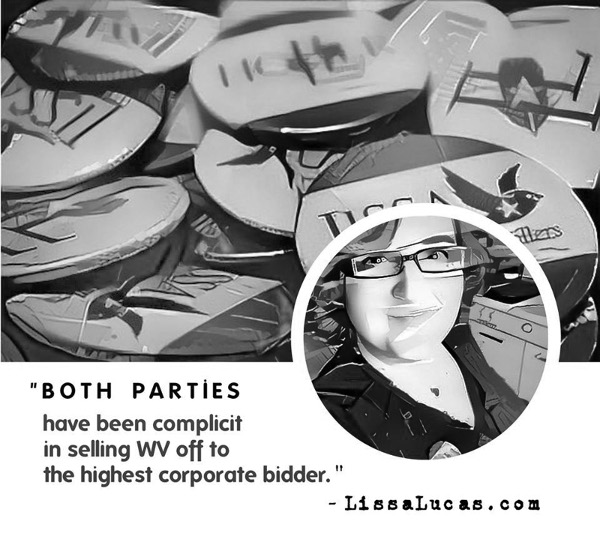 Sandy Reid for the People’s Tribune interviewed Lissa Lucas, a West Virginia native, who is among those Americans taking matters into their own hands by running for political office. She asked Lissa about her campaign for the West Virginia House of Delegates.

“From both sides, politicians are representing their own interests. The rich and powerful have nearly complete influence over public policy. Money buys power and outside funding is buying elections. I get fed up when every single representative of ours, including (U.S.) Senator (Joe) Manchin (D), spews nothing but a list of industry talking points. The concerns of regular people are not being heard.

“I’m running in a rural, red district, but I’ve gotten a lot of support. We’re all in this together out here. People don’t want dirty water; they’re concerned about having jobs to feed their families and I’m concerned about that, too. And no one is happy that companies can come in and put in a frack dump next door and transform your beautiful mountain view into an industrial zone—or just blow up your mountain and transform it into a smoking crater. The best way to fight that industrial aggression is to make sure we bring good jobs here, not just McDonald’s or Wal-Mart. Most people would much rather work in a good job that doesn’t hurt their neighbors or themselves, jobs that preserve West Virginia for future generations.

“Look, it’s bad out here. It’s not unusual not to even have potable water in the house; I don’t. I get that there are places that are far more desperate for aid than we are, places you can’t go to the grocery store for drinking water like we can. But nonetheless, in the richest country in the world, here we are. We’re a part of this country, too, and it’d be nice if our representatives were fighting to make things better for us. From DuPont with C-8 to Freedom Industries with MCHM, we’re being abused… and then abused again when politicians like Manchin and McKinley repeat industry talking points in exchange for political donations ad nauseum. And insult to injury, from the outside people believe our politicians—who serve as mouthpieces for Coal and Frack Barons—are accurately representing our views. They’re not.

“Here’s what we want: West Virginia could be a state of vast hunting preserves and full of clean water for fishing and whitewater rafting. We could focus on renewable energy, but we need to get our priorities straight and stop subsidizing fossil fuels. Renewables create far more jobs per dollar invested. It will have to be a fast, radical change to our state economy, because we just can’t allow our health to be sacrificed, and we can’t allow people to lose their ability to provide for their families, either. But we can have good jobs and a clean environment, both. We all know what needs done, but our politicians are getting paid to make the rich even richer.

“So I’m saying, let’s get beyond the partisanship. Let’s focus on issues that will actually help people. Holler from the Hollers is my slogan because I decided that if I run for office, then whether I win or lose, by God they’re at least finally going to hear what we’re saying out here!”