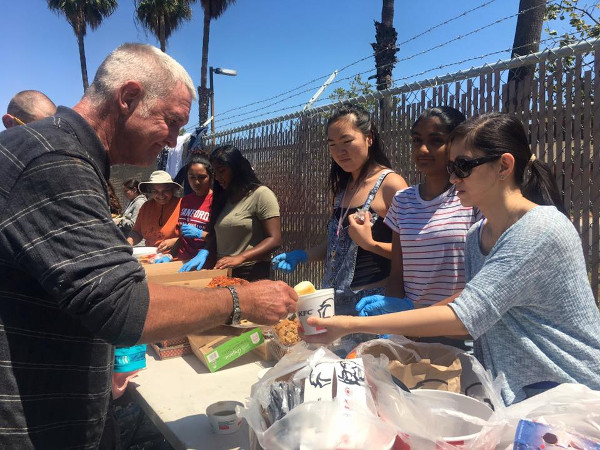 SANTA CRUZ, CA — Public outcry against efforts to stop people from feeding the hungry has inspired the creation of the myth about the dangers of “street feeding,” claiming meals shared on the streets “enable the homeless” and discourage them from seeking recovery services. This theory is being adopted by cities all across the United States as justification for laws banning free meals.

Robert Marbut, a consultant hired by cities to address homelessness, is the most prominent advocate of this theory, and has been hired as a highly paid consultant by several cities. Daytona Beach renewed Marbut’s contract in January 2015 at a cost of $7,200 per month for 14 months, plus up to $35,000 for expenses.

NPR interviewed Marbut in 2014 after Ft. Lauderdale, Florida generated headlines about the arrest of 90-year-old Arnold Abbott and Food Not Bombs volunteers for sharing food outside the downtown library. Said Marbut, “If you give food on the street, you end up preventing people from going into 24/7 programming.”

Marbut’s model is the 37-acre Haven for Hope campus he opened in the summer of 2010 in San Antonio, Texas. Local media proclaimed that “comprehensive services like those at Haven for Hope are typically only available in state prisons.” The campus has 550 closed-circuit television cameras and a staff of 40 security-guards.

When Haven for Hope opened, the city made street feeding of the homeless illegal, unless it’s done by licensed kitchens. But Haven for Hope, and the law against sharing food, has failed to force the homeless out of sight. The Rivard Report recently reported “dozens of homeless camps are hiding in plain sight throughout downtown San Antonio.”

St Petersburg, Florida hired Marbut, and at his suggestion opened the Pinellas Safe Harbor facility in the old county jail. Sheriff’s department data indicated that just 7% of those leaving the facility found permanent housing, while 3% went to another shelter or to a friend or relative. Most returned to the streets within a month.

The effort to make it more difficult for people to have access to food comes at a time when the federal government is drafting legislation to cut food stamps, Meals on Wheels, and other aid to the poorest Americans, while redirecting those tax dollars to an increase in military spending and tax breaks for corporations and the 1%. There has never been a more important time to support more food and fewer bombs.

One thought on “Cities outlawing sharing food with homeless people”