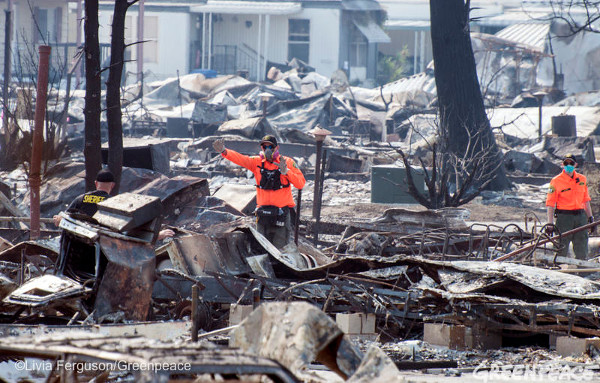 SANTA ROSA, CA – As if getting burned out of your house wasn’t enough, thousands of families in northern California are now faced with finding a place to live where the vacancy rate before the fires was just 1 percent.
Governor Jerry Brown activated a six-month rent control when he proclaimed states of emergency for the three northern California counties. The proclamation caps rent increases at 10 percent for all rentals statewide.

Brown’s action covers much more than the limited number of apartment houses where rent control is permitted under the state’s Costa-Hawkins Act, passed in 1995 at the behest of the real-estate lobby.

Tenants’ organizations have launched an initiative campaign to overturn Costa-Hawkins in 2018. Banding together as “California Renter Power,” they organized a Renters Week of Action in October and gathered in Sacramento, the state capital, after the fires.

While the governor’s proclamation is in effect, landlords who try to raise rents more than 10 percent will be guilty of “rent gouging,” a criminal offense with penalties of a year in jail and/or a $10,000 fine.

But under current circumstances, even a 10-percent increase is rent gouging. California rents are twice as high as elsewhere in the country, driven up by speculators from at home and abroad. That is a major reason for California’s multitudes of homeless.

An hour’s drive north of San Francisco in Sonoma County, the fires destroyed nearly 7,000 buildings, including 2,900 homes in its largest city, Santa Rosa. Rapidly burned to the ground in a night of terror was the greater part of a large working-class neighborhood, a mobile-home park, and three expensive hillside developments.

Now, as they sift through the ashes of their former homes, families seeking a place to stay are well aware that, even before the fire, there was nothing available.

Their best hope is that the out-of-town speculators who have bought investment properties to run as weekend rentals – or just leave vacant – will rent them out full time.

Those properties are not capped by the state of emergency and the real-estate site Zillow reports that they are coming onto the market at exceptionally high rates (for example, $13,000 a month for a four-bedroom house).

Housing advocates in Sonoma County are deriving a number of lessons from all this:

● If the governor can invoke rent control in a fire emergency, why not for the housing crisis that everybody agrees has gripped the state?

● Local governments must pass their own ordinances, blocking any increase in rents whatsoever.

● Costa-Hawkins must be repealed, and getting behind the initiative campaign is the best way to educate and organize for that.

● Leaving building, mortgaging, and renting housing up to “the market” has failed repeatedly in recent years, and control by We the People would be a better way.