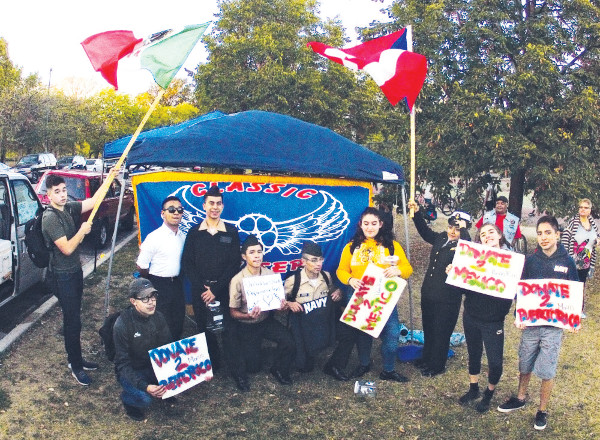 Hip hop community in Chicago is in solidarity with the victims of Hurricane Maria and the earthquakes in Mexico.
PHOTO/FLASH, RENEGADES OF FUNK

CHICAGO, IL — My name is Gabriel Carrasquillo, Jr. I am also known in the graffiti world as Flash, a member of Artistic Bombing Crew, one of the oldest graffiti crews from Chicago. I am a member of Renegades of Funk, a group of elders now preserving Chicago Hip-Hop history. I was given the name Flash for my love of photography. I am also a member of the Classic Cruisers, a bike club from Humboldt Park which preserves the vintage cruiser bikes. With the devastation in Mexico and Puerto Rico, we needed to do something.

On September 23, working with the bike club and graffiti artists, we descended on Project Logan. The bike club and others decided to stage their bikes on Fullerton and Milwaukee and with the help of Breaker Ray; they created collection cans out of paint containers. We started at 12 p.m., setting up DJ Eddie Ponce with the music and having Old Skool Sneak spraying the 15-by-175-foot wall.

The artists made a great effort to finish the wall with people of many races painting Puerto Rican and Mexican images. After 10 hours the wall was done and we had raised $1,200. The decision by Mos Def and Ray was to do something the following week in Humboldt Park.

On September 30, the bike club again set up in the park next to the tennis court. This time, Mos Def was the DJ and they whipped out the vinyl and had a break dancing battle. The break-dancers who won gave back some of the money for a total of over $3,000 dollars raised. I am very proud of what was accomplished. I have been involved but, sitting at work Monday morning, I felt I had done something for the people who had showed me how to be a man.