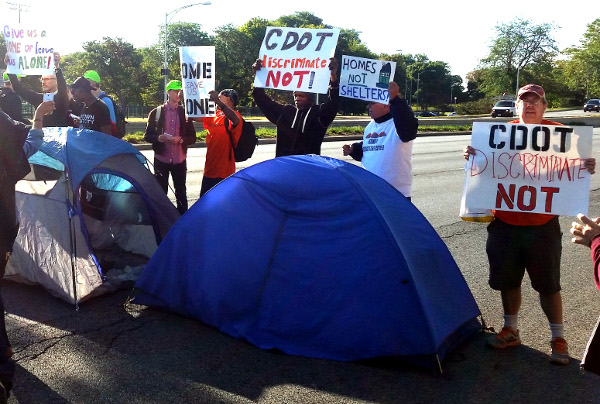 Former residents of the tent cities under the viaducts of Lakeshore Drive in the Uptown neighborhood of Chicago drew attention to the city’s plan to evict them without providing adequate alternative shelter by temporarily blocking traffic on Lakeshore Drive during the morning commute.
PHOTO/DIANA ZWINAK

CHICAGO, IL ­— “This is a lifelong fight,” said Carol Aldape, recently evicted resident of the Tent City under the viaducts in Chicago’s Uptown neighborhood. “This is something our children will be fighting, even our grandchildren. Maybe even their children.”
Chicago’s Mayor, Rahm Emanuel, and 46th Ward Alderman James Cappleman banded together with developers set on gentrifying Uptown. They turned their sights on forcibly evicting the homeless population, many of them former residents of Uptown who had already lost their housing due to higher rents and luxury condos, and living under the viaducts beneath Lake Shore Drive at Wilson and Lawrence Avenues. Though scattered, the community remains strong and still determined to make it clear that housing is a human right.
After an earlier Federal court ruled on an injunction filed by Tent City residents that the Constitution does not require the government to provide housing for its citizens, residents of the encampment brought another suit before the Illinois State Court. They are represented by the Law Project of the Chicago Coalition for the Homeless, the Uptown People’s Law Center, and a prominent, for profit law firm: Butler, Rubin, Sartarellii and Boyd (helping pro-bono). The magistrate on this case seemed dismissive of claims of urgency for the encampment residents while making many shockingly obtuse statements and generally seeming uninterested in hearing the homeless people’s view of the matter.
Despite this, Jay Wilson, another displaced resident, urged homeless people throughout the country who face similar tactics to “keep on fighting because promises are being made that aren’t being upheld, and we have to keep fighting to keep it upheld.”

These evicted encampment residents stress that homeless people must speak for themselves. “If you want to know what’s up with us, ask us. Don’t ask somebody else,” said Mark Saulys, a resident arrested in an earlier protest action while blocking Lake Shore Drive. He noted that the press and others want to talk to legal representatives, to more-or-less self-appointed spokespeople for the homeless from activist or advocacy groups, and to caseworkers working with their population instead of speaking to the homeless themselves.

As for future plans, Thomas Gordon, also evicted from the viaducts, is trying to hold the people together as best as possible without a stable encampment or even tents. (Chicago Police announced that any homeless people who try to put up a tent to shield themselves from the weather will be promptly arrested.) Gordon said it is important to maintain their adoptive family as well as stay potent to fight for the rights of the homeless. “A few of us are trying to keep people together to fight for the housing for these folks and by doing that for housing for all homeless people,” he said.

Saulys is proud that Tent City has proven that the street homeless can be organized. He wants people to realize that among any population of people, housed or not, there are those who “won’t ever get off the couch” but there are also always those who, “come hell or high water, will always show up, will always work for it, always get it together and always fight.”