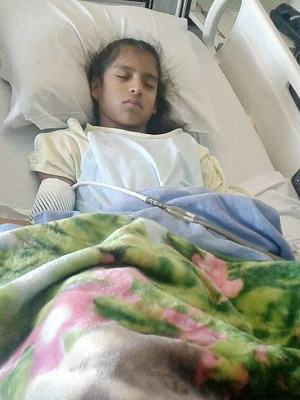 Armed federal agents waited outside the hospital room of a 10-year-old girl with cerebral palsy while she recovered from surgery. Then Rosamaría Hernández was taken to a shelter to await deportation. It mattered not that this frightened child had never been away from her mother.

Such inhumane treatment by the U.S. government is more and more considered acceptable. Why? Because Rosamaría lacks legal immigration status. Rosamaría lacks papers. In America, our value as a human being is being reduced to whether we have a piece of paper.

An immoral culture is being created that says that the lives of the working class and our children have no value. Underlying it is an economy that no longer needs much human labor. If we are not creating profits for the billionaire class, our lives have no value. But there is another morality also taking hold in America. “All I wanted was for her to get the surgery that she needed,” said Rosamaría’s mother to the New York Times. “When you’re a mother, all you care about is your child.”

Which morality do you choose?

As we go to press, due to the outrage over Rosamaría’s arrest, she has been released from the shelter. She still faces deportation. Let us lock arms, build our movement, and let the country know: WE WANT AN AMERICA THAT CARES FOR US ALL. NO HUMAN BEING IS “ILLEGAL.” DEFEND ROSAMARÍA!