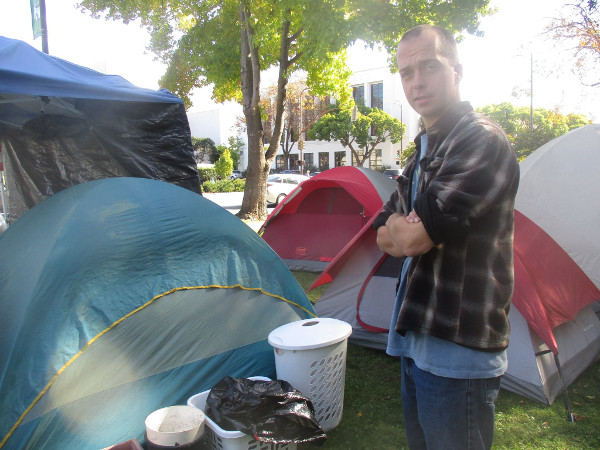 First they came for the Homeless pour tour in Berkeley, CA. The participants care for the needs of one another as they fight for their rights.
Photo/Sarah Menefee

BERKELEY, CA — Fruits of our labor? Surplus of yours can be traded for surplus of mine. Technology has advanced enough that no one needs to work as slaves. Or use money. There is plenty of land for all. 3D printing of houses is happening. Free energy exists.

We work because we are told that is how it is. That is the lie. We use money because everyone uses money. It equalizes skill sets, or so we are told. In reality, it is the chains of our slavery. It accumulates with a few, and is dangled in front of the rest of us. It promises happiness, but provides only misery.

I found happiness being able to survive without it for many years. I had the ability to do whatever I wanted every day. I survived by using what belongs to all of us.

It is our world, not just theirs. It’s about time people start learning that, because the elite are destroying our home.

We at the Poor Tour, a project of ‘First they came for the homeless’, have shown how this can be done: by taking care of each other and showing the rest of society how cooperation and mutual support can be done with very little. Everything could work this way if people had the power to do it on a social and world level. This is a short history of a project in the real world that illustrates the above words:

The Poor Tour started a year ago. A group of homeless were asked by city commissioners and social workers to bring attention to the lack of progress from the HUB (centralized homeless services). The homeless were not getting helped and the HUB budget was over a million dollars. So, we occupied, with our tent community, all over the City of Berkeley, including sites around City Hall. Over the next three months the homeless were raided and moved location 17 times, had multiple arrests, and suffered injury and hospitalizations at the hands of police. We did not quit.

In early January, the Poor Tour settled on a piece of property in South Berkeley. There it has remained. For nine months no police, no city harassment, and no real problems.

During those nine months the successes have been amazing. The Poor Tour is credited with the following: They saved a life and rescued a victim of a serial predator, they protected a senior with Alzheimer’s who had been missing for weeks, they reunited a runaway with her mother, they protected a victim of domestic violence, they protected a mentally disabled girl from sexual predators, and they have helped maintain an environment of stability that has helped over thirty people get themselves housed.