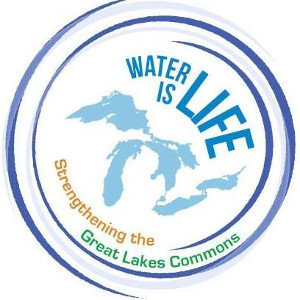 Editor’s note: The following are excerpts from an article about the recent Great Lakes Commons“Water if Life” conference in Flint, MI, by Emma Lui, campaigner for the Council of Canadians.

FLINT, MI – “My grandson, who is 12 years old, was to be an academic ambassador to go to Washington in 2014 and 2015. Well, he was an A-B student but by the time the lead began to corrode his brain, he was a D-E-F student,” said Bishop Bernadel Jefferson. A pastor for 27 years, she was one of the first signers of the emergency manager lawsuit against Michigan governor Rick Snyder in 2013. She said, “Tonight we make history. We did something they didn’t want us to do and that was to come together.”

Maude Barlow, world-renowned water activist, author and chairwoman of Council of Canadians, gave an important keynote speech on water justice struggles around the world and her work with other water warriors to have the United Nations recognize the human right to water and sanitation.

Indigenous lawyer Holly Bird talked about the need for governments to honor the relationships that Indigenous people have with the water and how that can be done without someone controlling or owning water.

Lila Cabbil from the Detroit People’s Water Board talked about how the water fights are racialized in Michigan.

Sylvia Plain from Aamjiwnaang First Nation in Sarnia, Ontario talked about how they have had methylmercury in the sediments in their river for a couple of decades and how the Anishinaabe have cared for the waters and land for thousands of years.

Marian Kramer of Highland Park Human Rights Coalition and Michigan Welfare Rights Organization spoke about fighting the shutoffs in Highland Park, a city within Metro Detroit where at one point half of the homes had their water shut off.

Peggy Case explained, “The right to water is being challenged everywhere. The privatization of water is a key piece of what’s going on in Flint.”

Participants at the conference were outraged that governments allow Nestlé and other water companies to take, control and sell water for a profit while failing to secure clean water for residents in Flint, Detroit, and many Indigenous nations. They pledged to boycott Nestlé and single-use bottles of water and to take action to end Nestlé’s bottled water takings in the Great Lakes; to work to have the human right to water implemented and to bring water justice to all who live around the lakes.

Visit rabble.ca for the full article.