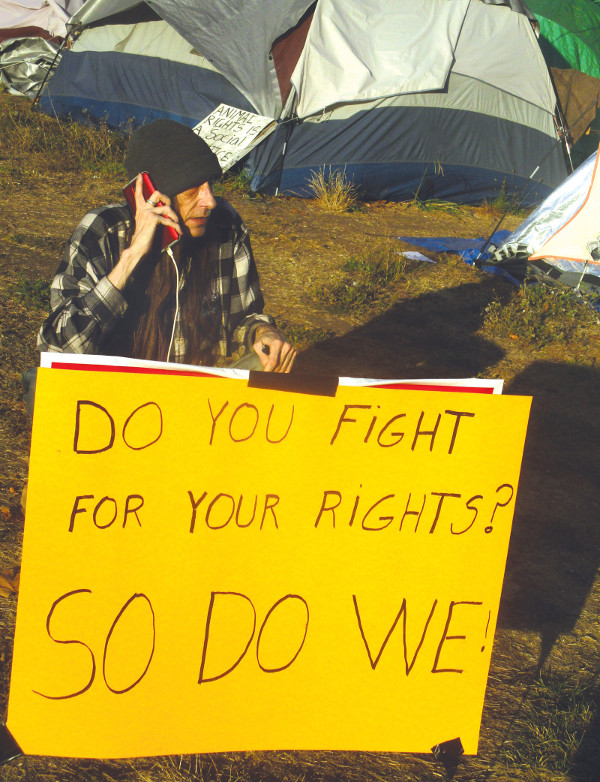 Mike Zint of “First They Came for the Homeless” gives a radio interview at the Poor Tour tent community in Berkeley, CA, celebrating a temporary court-ordered restraining order to a threatened raid on the site.
PHOTO/SARAH MENEFEE

In Berkeley, CA, the city says it can’t afford to supply homeless encampments with port-a-potties because they are using the money for hepatitis A vaccines. Hepatitis is breaking out everywhere because people are forced to live on the streets, with no way to relieve and clean themselves, and no city in the country is willing to solve this crisis by providing housing for all.

A concentration camp-like ‘sanctioned’ encampment planned for Berkeley will be the excuse to sweep the independent homeless camps out of sight and scatter the people who are building community there. Instead, homeless people are demanding that they be able to gather together and provide for themselves, and no harassment. The encampments where people who are homeless are gathering are bases of operations for the greater demand for housing as an absolute human right.

Any of us could become homeless. As another harsh winter looms, the demands of the organized homeless for what they need to survive and thrive point to the need for unity with the broader movement of people who want to see a decent society, under a government that houses and supports its people, instead of one that abandons and attacks us.