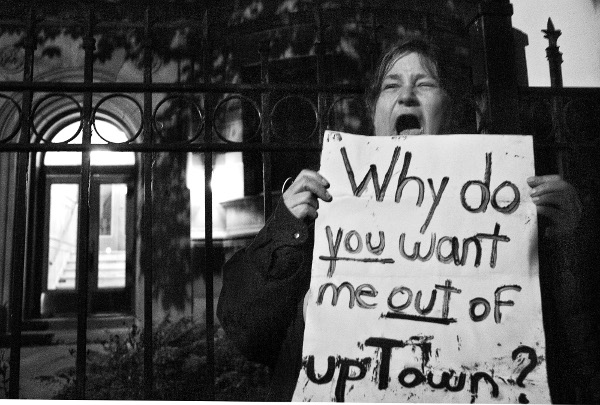 A woman who herself faces homelessness, fights alongside people who live under a viaduct in Chicago’s upscale Uptown neighborhood, and who were recently driven out by the City of Chicago. Though scattered, the community remains strong and determined to make it clear that housing is a human right.
PHOTO/FRANK JAMES JOHNSON

Homeless people all across America are refusing to disappear. Cast off by the economy, vilified by the news media, and targeted by the police, they are still standing up to fight for their right to exist. In Chicago, residents of Uptown Tent City resisted their eviction from the Wilson Avenue viaduct. They blocked traffic on Lake Shore Drive and sang, “This land is your land, this land is my land” in the middle of the highway. Across the country, when police threaten to arrest people for sharing food, they share food anyway. In Los Angeles, Skid Row residents have embarked on a campaign to “disrupt the Mayor” every time he makes a public appearance. And in Florida, a Christian minister has said that the homeless are the “tip of the spear” of the national movement for housing.

Many people now know someone who has become homeless or is only one job loss or illness or eviction away from it. Abandoned by the government that should represent them, either visible in doorways, or increasingly in tent encampments, living in vehicles, or invisible because couch-surfing or otherwise hidden, the homeless come from all walks of life, backgrounds, ages and nationalities. Many work part and even full-time. Thousands of elementary school children and college students are homeless. Elders and the disabled panhandle during the day and seek the shelter of doorways at night. Many die of exposure every year, victims of a dying system that counts human life as worthless. Without money they are not considered worthy to stay alive.

Homelessness has been seen in the streets of the United States for over 30 years, since the introduction of the microchip and automation into production replaced human labor and threw millions out of work forever, or into low-wage, part-time or contingent jobs that don’t put a roof over one’s head. We now have a society with astronomically high corporate profits on the one hand, and growing insecurity, misery, hunger and homelessness on the other. This is a shocking moral failure that could easily be solved by a political and economic system that takes care of people’s needs, instead of landlords’ and corporate profits. The basic demands of the homeless for homes and for all they need to live safe and productive lives are a demand for a society that puts that as its absolute priority: a society that shares the abundance it creates and fulfills the basic needs of all.

When homeless people resist, the system trembles. That is because a system that has no use for human beings must be and will be abolished. It is time to replace it with a cooperative economy based on meeting the material, cultural, and spiritual needs of people, not the bottom line of corporations.

HUD is no longer in the housing business, but corporate billionaires are

Society could provide for everyone. Why isn’t it?

One thought on “When the homeless resist, the system trembles”