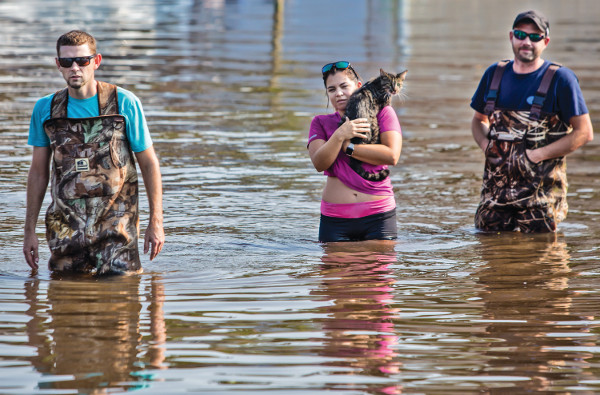 HOUSTON, TX — The water has subsided, and debris is still being removed from the worst hurricane in North American history. Through it all, volunteers flooded in to Houston from everywhere, but they cannot cover for the ugly and naked truth about the lack of preparedness of our government, even as people struggle to rebuild.

More than a few volunteers died from electrocution while trying to save neighbors from the raging floodwaters. At least one resident died from bacteria in the water and one has to wonder if more lives would have been saved if the mayor had told people to evacuate rather than telling the city to stay put. Had there been an evacuation, the mayor may not have needed to call for volunteers to help their neighbors escape rising waters.

With 13 Superfund sites and 800 water treatment facilities overcome with flood waters, the danger to the people of Houston was much greater than imagined, this alongside the alligators, snakes and fire ants made the entire episode highlight the need for a government prepared to protect its people.

The official record is 87 lives lost, $180 billion in damage, almost a million trucks and cars destroyed, 12,700 homes destroyed, and 203,000 homes damaged and 738,000 FEMA claims later, a different kind of alligator is beginning to show up.

All over Houston, in businesses there are signs, T-shirts, bumper stickers with the words, “HOUSTON STRONG!” We will rebuild! We will survive! We will grow even stronger! Calls are made all over the city, businesses are offering special finance deals to hurricane-affected customers. We are Houston strong and we care! Buy your furniture from me and I will give you special financing and free delivery! No money down if you lost your car in the hurricane, with special financing! Of course, city council is voting to raise property taxes $4.03 per month! Mayor Sylvester Turner, while calling for city council to raise taxes, is asking Texas governor Rick Abbott for some of the state’s $10 billion rainy-day fund to help with the cleanup.

Brandon York from IU CRU, a faith based group from Indiana University, came to help remove mold, pass out supplies and food. He was quoted saying that at first, he was discouraged by what he saw when they first drove to Houston in October on a Friday morning. Stray dogs, piles of junk and debris were still all around more than five weeks after the flood. He said there are people who need help but simply don’t know who to ask. There are resources, there’s money, but they need bodies, York said. They need volunteers to come and help.

We all knew the hurricane was the worst, we knew it was going to linger and we knew there would be flooding. We need representatives who will help us, not save the resources that we have already paid for, fail to act, then call for volunteers after the damage is done. Then still raise the rent!