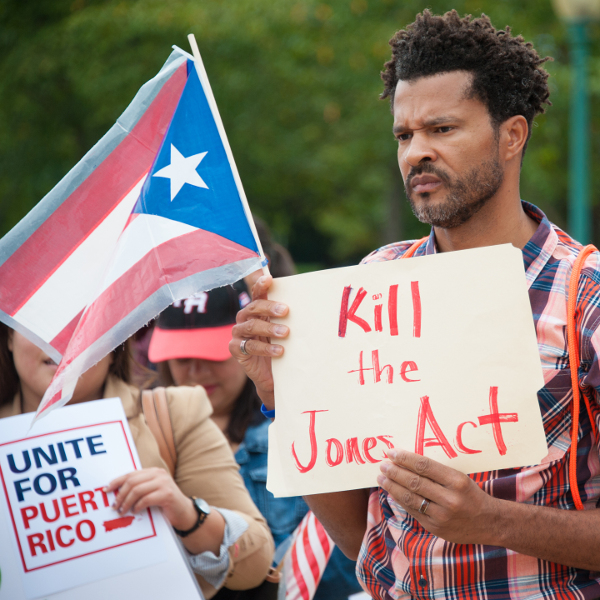 CHICAGO, IL — The physical infrastructure of the island will eventually be repaired. And much of it likely will be better than the decaying and outdated power grid that was already struggling before the hurricane.

But the big question is, who will the improvements be for? Significant numbers of Puerto Ricans were already moving to the States—particularly Florida—because of the declining quality of life and the severe lack of economic opportunity. And the gentrification of the island was already visible in the months and years before María triggered what is expected to be a new mass migration to the mainland.

With a fiscal crisis not unlike that of Illinois—exacerbated by an inability to independently make financial decisions in its own best interests—Puerto Rico filed for bankruptcy in the spring of 2017. Already overseen since last summer by the PROMESA fiscal control board, established under President Obama’s administration, the island had already lost any independence it may have had to deal with its insolvency. The PROMESA law promised to ensure that vulture capitalists would benefit while Puerto Rico’s schools, power grid, public health system, and social services were either forcibly dismantled to pay creditors or left to die. Meanwhile, the government of Puerto Rico was enacting measures to attract new residents—rich investors from the States—as a tactic to improve the economic outlook of the island.

Puerto Rico had never recovered from the Great Recession that rocked the entire United States nearly a decade ago. And it has lagged behind the U.S. economically for more than a century, since it was colonized in 1898 by this country when it won a war with Spain, Puerto Rico’s first colonizer.

Granted U.S. citizenship in 1917, just in time to be drafted to serve in World War I, Puerto Ricans both on the island and across the diaspora have long been divided about whether statehood, the status quo, or independence would improve the island’s situation. But regardless of where one stands on the status issue, evidence abounds of Puerto Rico’s second-class citizenship in relation to the Unite States. From its poverty level that has long been higher than the poorest U.S. state to the utilization of its people for drug experimentation, to military target bombing practices that would never be acceptable in white communities in the U.S. 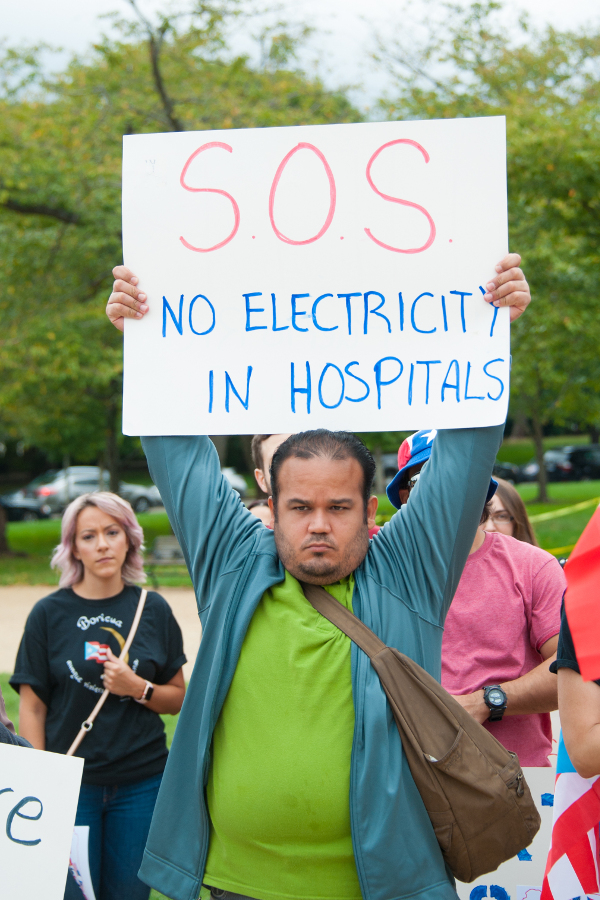 U.S. citizens residing in Puerto Rico are not allowed to participate in the election of the president of the U.S. and do not have representation in Congress, but must endure policy decisions that may not be in their best interests. And the history of the U.S. relationship with Puerto Rico is replete with Washington D.C. driven decisions that have had significant negative economic impacts on Puerto Rico, not the least of which is the Jones Act. This act, which doesn’t allow foreign ships to deliver goods to Puerto Rico, has not only added billions of dollars of cost over the years to Puerto Rican consumers whose goods must all be shipped in on vessels flying U.S. flags. The dollars sucked out of Puerto Rico’s economy because of those U.S. imposed costs mirror the level of debt that now burdens Puerto Rico. Puerto Rico’s financial crisis potentially could have been avoided if not for the Jones Act regulations.

And now those regulations have hampered efforts by other countries to send aid in the aftermath of Hurricane María. Foreign countries could not send assistance directly to Puerto Rico until the Jones Act was lifted by the Trump administration. Though Trump lifted those restrictions immediately to assist in Texas and Florida after hurricanes Harvey and Irma, he delayed such help in Hurricane María. And then he lifted the Jones Act for Puerto Rico for a mere 10 days.

Meanwhile, the interior of the island remains in ruin, and reports run rampant that many towns and rural areas have not been reached with any Federal Emergency Management Agency assistance. Many families in the diaspora continue to share through social media that they have had little-to-no word from their loved ones on the island, especially those who live in small, isolated towns in the interior of the island. Media reports have highlighted some towns that are unreachable because of mudslides and washed-out roads. And they have shown other towns where the roads are clear but no federal help has arrived.

Three weeks after Hurricane María hit, the overwhelming majority of Puerto Ricans continue without electricity and running water, without access to telephone service or the internet. Those who have seen their power restored primarily live in the San Juan metropolitan region. Most residents are surviving on tiny rations of food and water and are waiting for hours in lines for gas to run generators and vehicles. Reports of an emerging public health crisis are on the rise as people die from diseases related to drinking river water polluted with feces, dead animals and the like. 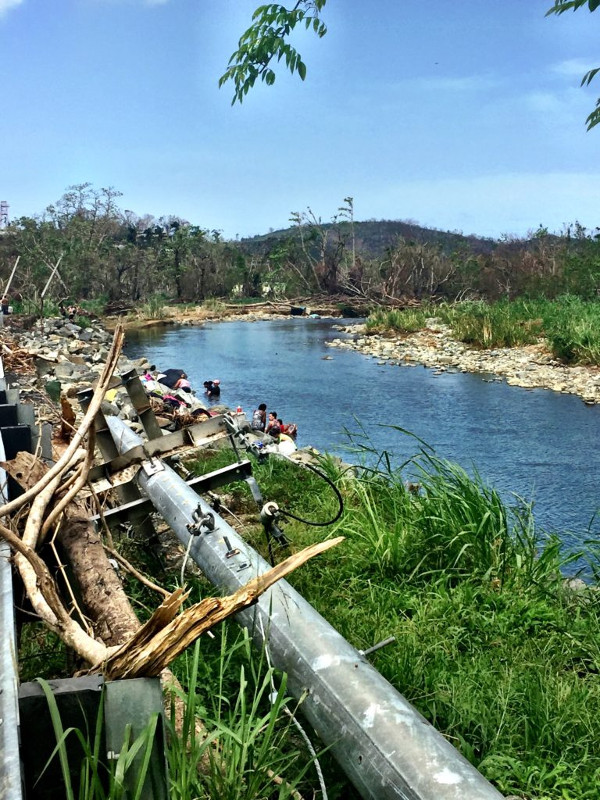 Families wash their clothes in a stream in Puerto Rico.
PHOTO/MICHAEL BUCELLA

On his overdue and too-short visit to survey the hurricane damage, President Trump visited Guaynabo, one of Puerto Rico’s wealthiest cities that already had its electricity back. He minimized the magnitude of the crisis while deridingly joking about how much restoration of Puerto Rico would cost the U.S. government.

It took more than two weeks for Trump to send to Congress a request for an aid package for Puerto Rico, and it has been reported that the aid consists of $4 billion worth of loans rather than grants. This president just wants to load Puerto Rico with more debt.

After enduring more than a century of control by the United States and sending huge percentages of young people off to serve in the U.S. military, Puerto Rico is being treated like a stepchild.

Actually, Puerto Rico is treated much worse than a step-child. I and my husband are in the process of lovingly making arrangements to evacuate my step-daughter out of Puerto Rico and to help her start a comfortable new life here with us.

As my college-student step-daughter leaves the disaster that is Puerto Rico, as will many others, the already-ongoing brain drain of Puerto Rico is only made worse. As hundreds of thousands of migrants potentially leave behind the battered island, we must ask the question of who will rebuild Puerto Rico.

Puerto Ricans are extremely resilient people, and many are declaring their intent to rise up and overcome. But the vultures were already flying overhead, ready to devour the spoils in the midst of economic devastation. And those who seek to privatize many of the island’s assets were already waiting in the wings, even before the storm.

As we grieve the losses, we must reclaim our beautiful Puerto Rico. Some have reported the hope that was stirred up in them upon already seeing new growth sprouting on tree branches that were completely stripped of leaves. Some things will never be quite the same, but let’s make sure that our beautiful homeland rebounds as a place that will continue to nurture native Puerto Ricans for decades and centuries to come.