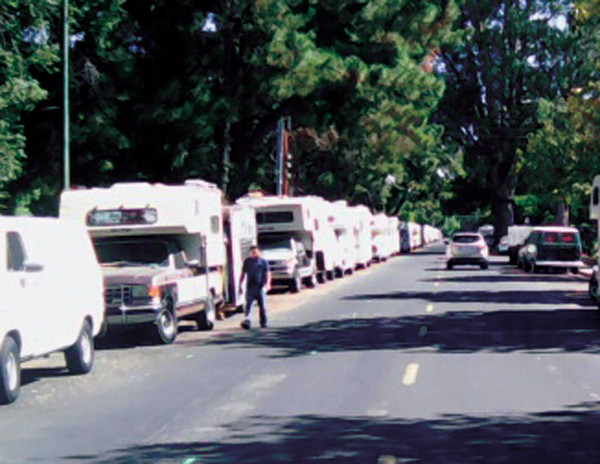 People in Mountain View, CA, live in RVs parked on Crisanto Street for as far as the eye can see.
PHOTO/JOHN BETTS

MOUNTAIN VIEW, CA — The vans and RVs number about 45 now. The scene is mellow, everyone is very friendly, and low profile, except some loud mouth clowns who live in a camper near our van. They’re up early blabbing and jiving around idly sitting around on the street. But they’re not bad people just kind of inconsiderate of the neighbors.

We saw an article in the Palo Alto Daily Post a couple of days ago. The police in Palo Alto are starting to arbitrarily decide when some people haven’t moved their rig after 72 hours. A woman who works full time and had received various citations, but had paid them off, came home to find her RV towed away, and a lot of her belongings spilled all over the street. She is demanding redress of her grievances. A police spokesperson was quoted trying to justify their arbitrary stealing of several people’s vehicles.