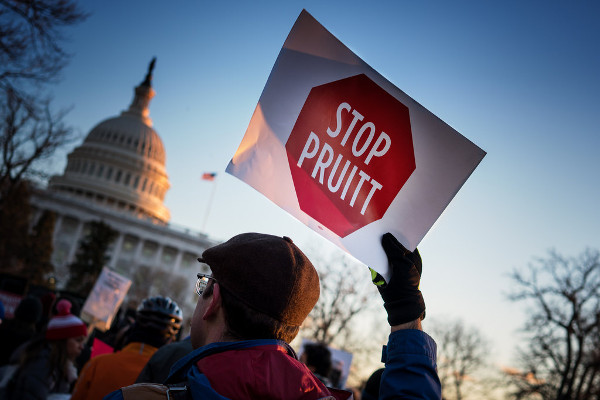 WASHINGTON, DC — On October 23, two Environmental Protection Agency scientists were blocked from speaking at a scientific conference on the future of Narragansett Bay, Rhode Island. The scientists were prevented from presenting their work because it identified the danger of climate change to the health of New England’s largest watershed. This was EPA Director Scott Pruitt’s latest step in dismantling the EPA’s science program. His overall goal is to create an atmosphere of intimidation and fear among EPA scientists by blocking publication and dissemination of valid research findings and by creating “politically correct” scientific review boards to ensure that good science is punished not rewarded.

What is happening at the EPA is not an isolated event. While media attention has concentrated on Trump’s buffoonery, his administration has steadily eroded the scientific capabilities of government and academic laboratories through budget and staff cuts and reduced grant funding. The affected programs include the Agriculture, Interior and Energy departments, the National Oceanic and Atmospheric Administration, NASA and the Smithsonian Institution. Indeed, the new leadership of the EPA and of the Agriculture, Interior and Energy departments openly reject climate change.

Why such a broad attack? The primary goal of science is to increase our understanding of the world and to devise ways to improve the lives of all species that inhabit it. The world is a complex, interrelated system and scientists study one small area and then connect their findings with the larger understanding of our planet. It is like discovering and describing one piece of a jigsaw puzzle and then fitting it into the evolving picture.

We know many of the pieces of the climate change puzzle because of the dedicated work of academic and governmental scientists conducted in and supported by grants from the multiple U.S. government agencies which are under attack. This attack is consistent with the government’s open support for the corporate rape of the Earth. The goal is to tear up the pieces and destroy the understanding of the climate change picture, in order to disarm and blind us to the breadth and totality of the devastation carried out in the name of profit. The result will be a world ravished by catastrophic climate events, polluted, poisoned and uninhabitable.

This is not the future that we want. As scientists, we have dedicated our lives to understanding our complex and evolving world. In part, it is because we are people who like to put pieces together and solve puzzles, but mainly it is because we want our children to live in a world freed from exploitation and environmental destruction. We know that scientists are only a small part of a greater movement and that we are being targeted for discovering and telling the truth. The EPA is the initial target of the attack on climate science and EPA’s scientists need our help. Scott Pruitt must be removed as head of the EPA and control of the agency placed in the hands of its scientific workers.