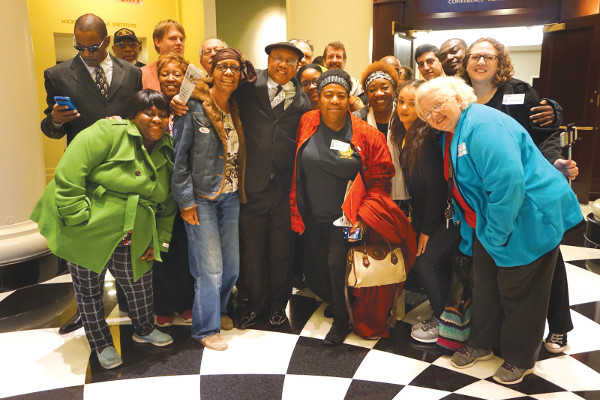 The Rev. Edward Pinkney and his supporters gather outside the Michigan Supreme Court chambers where judges heard the unjust case against him for which he served 30 months in prison.
PHOTO/JOSEPH PEERY

CHICAGO, IL — The case of Rev. Edward Pinkney went before the Michigan Supreme Court on November 7, 2017. While supporters came from various parts of the country, the largest contingent came from Flint—a city that understands firsthand the importance of this case. They know this case has nothing to do with forgery of dates on mayoral recall election petitions, that it has everything to do with shutting up Rev. Pinkney. Rev. Pinkney, an uncompromising defender of the town’s poor, exposed the corporate-run emergency financial management system in Benton Harbor, and the role of the unelected emergency manager in allowing for Whirlpool’s theft of public lakefront property.

The whole world has seen in the lead poisoning of the water of Flint just how far emergency manager dictators are willing to go in overthrowing democracy and replacing it with corporate rule. The question now is how far is the Supreme Court of Michigan willing to go to defend democracy? The Berrien County court that convicted Rev. Pinkney showed how far they were willing to go by playing the race card.

During jury selection they aggressively expelled all African Americans, leaving the trial to be decided by an all white jury. No one on that jury was from Benton Harbor or had lived under emergency financial management. It is next to impossible for a Black man from the poorest town in the county to get a fair trial from an all white jury from the richest towns in the county. This isn’t merely common sense. It is also the opinion of the United States Supreme Court. This issue is central to the case and calls into question the definition of a trial by one’s peers and the meaning of due process.

During the trial, the prosecution admitted there was no physical evidence linking Rev. Pinkney to the crime they were charging him with. And yet the prosecution repeatedly introduced examples of Rev. Pinkney exercising his First Amendment right to free speech, political activities and community activism as evidence he committed the crime. It is even questionable if the law, MCL168.937, that Rev. Pinkney was convicted of violating, even covers forgery of recall election petitions, or whether it is a felony or a misdemeanor in that the Berrien County Court deemed it a felony. These are some of the issues that the Michigan Supreme Court judges spent a lot of time questioning Berrien County court prosecutor Aaron Mead about, some of which he seemed to have difficulty answering.

Will the Michigan Supreme Court rule on the side of justice or bend the rules in favor of corporations? It may take months for the court to rule on this case. But in the meantime, it can and must be widely taken up in the other court that really matters. That is the court of public opinion. It is in that courtroom, free of corporate money, that we can win. In that court, the judge, prosecutor and jury includes the exploited and oppressed of this land, regardless of color. In that courtroom, evidence shall include how the corporate ownership of the economy has robbed us of our freedoms.

One thought on “Pinkney case: Will the Michigan Supreme Court rule on the side of justice?”