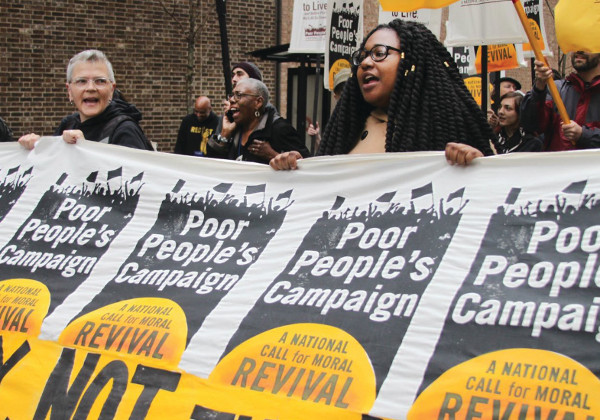 The Rev. Dr. Liz Theoharis, co-chair of the campaign, and the Rev. Traci Blackmon, a member of the national steering committee, met with McDonald’s workers on a lunchtime strike line in Memphis, hearing about workers’ struggles to get by on minimum wage pay and their fight for $15 and union rights. The action kicked off a two-month national tour by the campaign to shine a light on the harshest poverty in the nation and lift up the leadership of poor and disenfranchised people who are organizing for change.

The tour by the Rev. Dr. William Barber, campaign co-chair, and Rev. Dr. Theoharis will stretch from Appalachia to the Rust Belt to the Central Valley of California, reaching more than a half-dozen cities nationwide. It began one week after thousands of poor people, clergy and activists announced they are joining the campaign, flooding state capitol buildings in 30 states and the U.S. Capitol in Washington, D.C., to serve notice on state and federal legislative leaders that their failure to address the enmeshed evils of systemic racism, poverty, the war economy, ecological devastation and America’s distorted national morality will be met this spring with six weeks of direct action – including one of the largest waves of nonviolent civil disobedience in U.S. history.

“Moral agents in places forgotten and dismissed by those in power are standing up to demand change, and by standing with them, we will help save the soul of our nation,” said the Rev. Dr. Barber.

“We are traveling the nation, meeting up with poor and marginalized people who are uniting and organizing to end systemic racism, poverty, militarism and the war economy and ecological devastation,” said the Rev. Dr. Theoharis. “Grassroots leaders are coming together across lines of division to become a powerful force for change in this nation.”

The organizers say the campaign will intensify starting Mother’s Day, leading up to a mass mobilization at the U.S. Capitol June 21, and combine direct action with grassroots organizing, voter registration, power building and nonviolent civil disobedience.

Editor’s note: Information for this article was taken from kairoscenter.org.