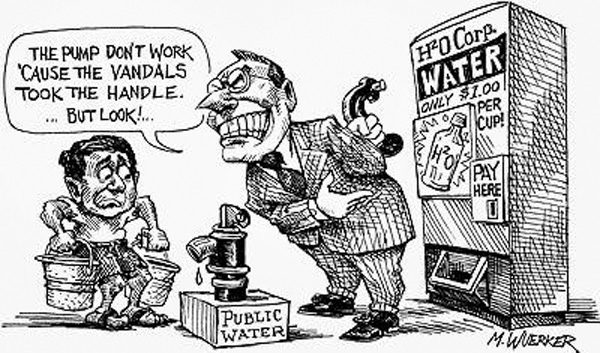 “The last world war will be fought over water. … You can’t eat or drink your money.” — Kylo Prince, spiritual leader, Dakota and Ojibwe

Water. There is no life without it. Despite covering about 70% of the Earth’s surface, only 3% of it is fresh and suitable for drinking. Over one billion people lack access to water and another 2.7 billion find it scarce for at least one month of the year. According to UN projections, global demand for fresh water will exceed supply by 40% in 2030, thanks to a combination of climate change, human action and population growth.

In this light, Goldman Sachs declared water a “critical commodity” in 2008, referring to it as “the petroleum of the 21st century.” In the U.S., water is a $425 billion industry. Investment banks such as Goldman Sachs, J.P. Morgan Chase, Citigroup, UBS, and other elite banks are gobbling up the rights to groundwater, aquifers, and rivers, land with water on it or under, desalination projects, irrigation and well-drilling technologies, utilities, water infrastructure maintenance and construction, and more. They have amassed billions of dollars to buy up infrastructure around the world.

Furthermore, investment bank Citigroup urges water-rights owners to sell water to fracking companies. Fresh clean water is necessary for fracking which makes it a premium investment. Water for fracking can be sold by water companies for $3,000 per acre-foot instead of only $50 per acre-foot to farmers. Each fracked well requires 3 to 5 million gallons of water. Eighty percent of this water cannot be reused. Selling water to “frackers” has left communities high and dry in Texas and California, also profiting bottled water corporations such as Nestle as entire communities purchase bottled water for everyday use.

The privatization of public water systems is moving rapidly. In Kern County, CA, the Kern Water Bank (a large underground aquifer) was turned over to two giant agribusinesses while taps ran dry in nearby communities, forcing workers to buy bottled water. Adam Keats, attorney with the Center for Biological Diversity, predicts the private ownership of that much water will lead to speculation, and profitmaking.

Water and infrastructure-privatization is accelerating as many local and state governments, suffering from revenue shortfalls and under financial and budgetary strains can no longer maintain and upgrade their own utilities. They are vulnerable to corporate pitch-men who promise privatization increases efficiency and saves money. As Mary Grant from Food and Water Watch points out, often when they refer to efficiency, it’s cutting corners and cutting back water system jobs. It’s not actually making systems work more effectively. Water quality declines and price increases. Private companies, on average, charge 59% more than local governments do for water service. What privatization means for communities is rate hikes. It means loss of local control over a service essential for public health and wellbeing.

In communities across the nation, from Bakersfield, CA, to Atlantic City, NJ (where the people recently stopped privatization efforts there), from Flint and Detroit to New Orleans, the people are standing up to the corporate take over of water. They are demanding government guarantee water as a human right and protect water as a common good. As corporations turn to speculation as a means to stay profitable, we, the people must demand government nationalize these corporations and run them in our interests.