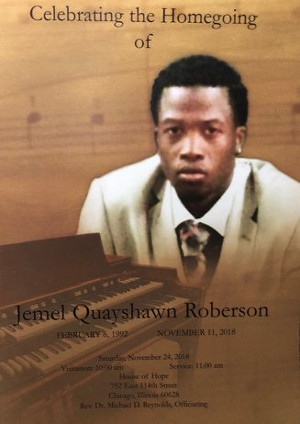 CHICAGO, IL — HICAGO, IL — Jemel Roberson was a 26-year-old father. He was a talented musician who belonged to a gospel singing group and played organ in Chicago area churches. He was an armed security guard at Manny’s Blue Room Lounge in suburban Robbins and his ambition was to become a police officer.

In November, after Jemel heroically captured a gunman who shot three people at Manny’s, a policeman arrived on the scene and shot him to death. That officer was from another suburb, Midlothian. Across the country, people reacted to the news with anger and suspicion. Jemel was African American and the officer is white.

The People’s Tribune went to Robbins and spoke to two of the gunshot victims and to other witnesses at Manny’s as well as to a longtime customer and nearby neighbors.

We learned that around 4 a.m. on Sunday, November 11, there was a disturbance at Manny’s. Jemel intervened and removed two men from the premises. One of the men soon came back with a gun and began shooting. A bullet grazed a female bartender’s neck and the DJ was hit in his left hand and arm. A third customer also was hit.

In the parking lot, Jemel shot the gunman in the buttocks, got him on the ground, put his knee on his back and pointed his gun at him. Robbins police soon arrived.

What happened when the Midlothian cop shot and killed Jemel? The Illinois State Police (ISP) said on November 13 that the Midlothian cop who came to Manny’s was responding to the gunfire there and arrived while the action was still under way.

ISP said Jemel had a gun and was not wearing clothes “readily” identifying him as a security guard. The ISP said the cop repeatedly commanded him to drop his gun and get on the ground.

However, the ISP did not say the cop saw Jemel committing a crime.

Two gunshot victims and other witnesses told the People’s Tribune something very different.

They said the Midlothian cop came after the situation was under control, and that the cop had an automatic rifle. Jemel wore a guard’s black uniform with the word “security” in large white letters on his shirt, vest and cap, they said. They also said other police officers and bystanders shouted that Jemel was a security guard.

Most importantly, they said Jemel had no time to comply. Some said the cop only shouted “Freeze!” and then fired. Others said the cop said nothing and fired.

Also, witnesses said the cop jumped onto the bar and pointed his rifle at several people in the club. The wounded bartender said he pointed the barrel at her face.

Who is he? Midlothian police would not identify him by name. A federal judge in Chicago refused to let the cop’s name be disclosed. Midlothian police did say he belonged to the South Suburban Emergency Response Team, a SWAT group of cops from several departments.

A recent study found that police in the U.S. kill an average of three adult men a day. As capitalism sinks deeper into crisis, the ruling elite unleashes systemic police murder to keep control. No one is safe.