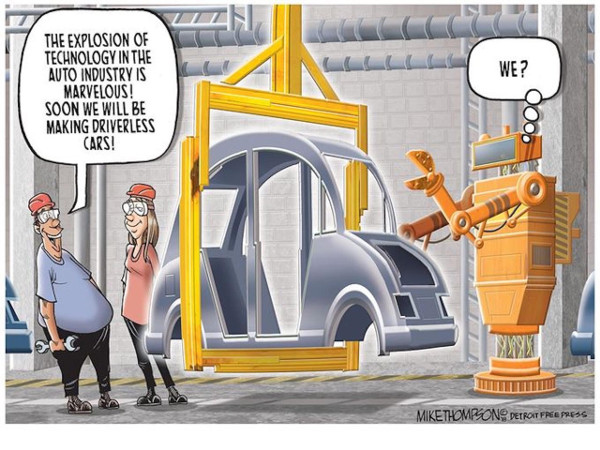 DETROIT, MI — In the face of record profits, General Motors (GM) announced on November 26, during the start of the Christmas Holiday, plans to end production at five plants in the U.S. and Canada, cutting almost 15,000 jobs. GM blamed the cuts on declining sales of small cars, the need to stay ahead of the curve, and an anticipated economic crisis. Ford recently said it was also cutting its salaried workforce for roughly the same reasons. GM CEO Barra said she wanted to act now to sustain profits when the economic crisis comes, and so GM can keep investing in new technology.

With the advent of the Trump-initiated tariffs, and the 2019 auto negotiations fast approaching, GM will use this announcement as a battering ram against the unions, government tariffs, and state and local governments that are affected by this action. These layoffs and plant closings will be used to further drive down GM’s cost of production and will devastate communities across the country. But this is nothing new. One of the plants to be closed, the “Pole Town” assembly plant in Detroit, home of UAW Local 22, came into existence as a result of whole neighborhoods and people being uprooted and destroyed. At one point in that 1981 struggle, SWAT teams were called out against a church to carry out the decision. Implicit in that decision was the understanding that this plant would not close. GM’s 2018 third-quarter profit rose 37%. And yet, here we are.

As advanced technology transforms the global economy with labor-less means of production, markets everywhere of all types are glutted, giving rise to a global crisis of overproduction and permanent unemployment. In auto, the number of people working today is hundreds of thousands less than in 2000. More job cuts, plant closings, deprivations, and dispossessions are on the way. By cutting jobs and closing plants, GM will save $10 billion by 2021, supposedly to invest in electric and autonomous vehicles. GM already receives subsidies and tax breaks, in addition to a $7500 income tax credit for the purchase of its electric cars. The taxpayer bailout of GM during 2008-09 helped GM boost its production in China. The permanent corporate tax cuts championed by Trump that Congress enacted last year saved GM $157 million in federal taxes just in the first nine months of 2018. GM also got a one-time tax break, that will likely amount to hundreds of millions, on profits it had held offshore. In 2018, GM spent at least $100 million of its tax-cut windfall buying back its own shares, a move that enriches the shareholders, not workers. In fact, without tax breaks, subsidies, grants, and credits along with out-and-out thievery and exploitation, all of which is perfectly legit, these private corporations couldn’t exist.

Public property in the form of government help is used to enrich the billionaires and prop up the corporations and a failing capitalist system. They get away with it because they have the political power to do it. Government is in their hands. The only way out of this is a new society of, by, and for the people, and where the production of everything we the people need to survive and thrive is run and owned by society, and not corporations like GM.