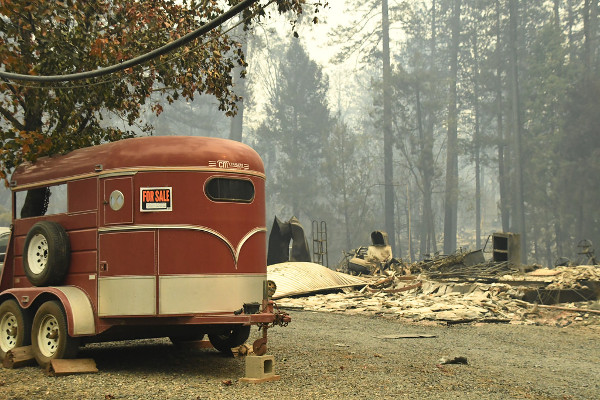 A trailer sits for sale amongst the devastation in Paradise, CA. The fire, which began November 8, burned through the town, destroying 7,600 structures and scorching 125,000 acres. Many families remain homeless.
PHOTO/CALIFORNIA NATIONAL GUARD

Paradise, California is a town which is only a10-minute drive from the bustling little town of Chico. Most people wouldn’t be able to point either out on a map, yet for many this is where they have grown up and lived their entire life. I started my stay in Chico a short four years ago and have been in love with this area ever since.

With the Camp Fire that ravaged this area only a few months ago, citizens are still picking up the pieces and figuring out what to do. Now that the smoke has settled, though, events are popping up all around the North State in order to achieve some unity and help those affected.

In the days after the fire started, it was incredibly uplifting to see so many shelters popping up all around Chico. While somewhat unorganized, some individuals even started collecting donations in the Walmart parking lot. Seeing people do everything they can in order to help their fellow human beings has been inspiring, to say the least. Shelters all around the area have opened up their doors to evacuees, with donations from citizens pouring in and with no end in sight. Many places have actually quit taking in donations due to the influx. While that may discourage some people from donating, the road to recovery is a long one and many of these places will need volunteers and donations in the months to come as we all figure out what to do.

We also must hold companies like PG&E accountable for their role in the Camp Fire specifically. Whether or not they are solely to blame for the fire, it’s important that they are held accountable for the negligence. As was reported extensively, they supposedly were going to shut off power to the area where the fire ignited in the days leading up to it due to a heavy wind advisory.

Action has already begun in this area of things. Community members are organizing together and filing lawsuits against the company in order to achieve some sort of restitution. While we will never get things back 100% to what they once were, all we can do is be thankful for all that we have and rebuild.

If you want to get involved in any way, a quick Google search of the “Camp Fire Donations/Volunteers” will bare some links that will be of use. If you live in Northern California, volunteers are of the main concern. If you’re not in the area, money seems to be most needed due to the influx of donated goods at nearly every shelter. Whether or not you have the capacity to help, even just simple things like reaching out to victims is key in creating a sense of unity.