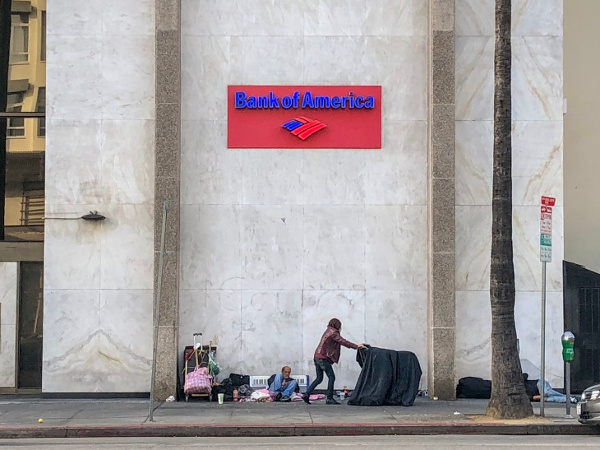 People without shelter on Sunset Boulevard in Hollywood. On any given night, 52,765 people fall asleep home less in Los Angeles County either unsheltered on the street or in a homeless shelter. Meanwhile, profit-driven banks and corporations rake in billions. There’s plenty of money to house everyone.
PHOTO/MATT TINOCO, LAIST

No such thing as a better tomorrow. That is the parable that came out of our conversation, when her realism triumphed over my optimism. South Central, Los Angeles, 37 years in, she tells me. No, here there is no such thing as a better tomorrow. Unable to devine my dreams as both Martin Luther King, Jr. and Cesar Chavez, and others, once and still, believers, I’m afraid that this time it may be the end of when “we” stood as a picket line, whether if what “we” wanted collectively could be drawn out as a prosperous community or as a single star. In more reasonable words, I’m afraid that “we” have lost.

We are a community within a nation fighting against our own state is what I hear in volunteer meetings, whether to streetwatch the police, stand up for black lives, or fight to end gentrification. That everyone knows it makes it stick: “we” discuss it whenever we can, living what we know hurts and harms in the end. “When we fight we win.” I’ve heard it.

Here, where I live, I assume that the water is not quite as good, or clean, as in Beverly Hills, the Hollywood hills, Sylmar ranches, and wherever life is lush and breeds belief in LA. I also assume that my house, which I purchased, is made of lesser material and that I am always hotter or colder. My experiences at the beach are a lot more messy, and so are my experiences at any tourist site. I can do nothing about homelessness I suppose, and I have no business studying Marx, Klein, Malcolm X, Tariq Ali, or Lenin (thank you): my life is like the next, and I must swim, though I will never support a public capitalist.

My neighbor Mariela does not vote anymore. She loves her community with folly I tell you, like the way she puts on the hat she bought when she visited San Francisco for a community event. She believes in justice (she really does), she believes in peace, and so lives with both plants and animals as happy as her children have always been. She drives around with a pensive face sometimes because it’s often pretty hard to just save enough to pay the bills along with everyday expenses. No, Mariela does not vote anymore though she can because the government reminds her more of gangsters and their shiny gear then the things she likes: she walks with friends, helping out, and cooking together food that all will eat.

November 6 elections? Should I show you my notes on our dead children, our incarcerated sons? Night here in LA reveals both my quiet and pain.