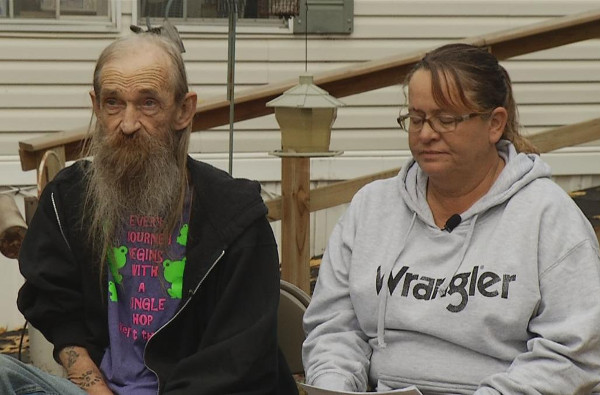 There are many ways the federal government is trying to cut the Medicaid rolls. This Elmwood, Nebraska family wants people to know that, “If Medicaid helps your parents, they want their money back.” The state aims to take away the home of their grandmother who had Medicare and Medicaid before her death from cancer. Family members decry that she worked all her life and paid taxes, and that nobody can “afford these hospital bills today.” With a post-death lien on the property, the family either pays half a million dollars for a home worth $50,000 or $60,000, or they lose the home.
PHOTO/ANGIE RICONO, KCTV5.COM

The elections left little doubt that universal healthcare remains an unmet necessity. From passage of Medicaid expansion referendums in three ‘red states’ to candidates running and winning on Medicare for All platforms, voters cast millions of ballots mandating some form of government guaranteed healthcare for all!

Meanwhile, new rules and regulations are tumbling out of government machinery that undermine these the democratic aspirations; destroy what isn’t profitable; and privatize what was once inviolably public. Medicaid is in the eye of that storm.

In June, Arkansas was approved by the Center for Medicaid and Medicare Services (CMS) to phase in work requirements for 167,000 of its nearly a million Medicaid enrollees. Arkansas was one of only two southern states that expanded Medicaid triggering a 51% drop in the number of underinsured. Now it’s the first state to institute a work requirement culling over 12,000 people from Medicaid in less than six months! Those impacted are required to work 80 hours a month or other approved criteria and report that exclusively via an online portal. Arkansas is second only to Mississippi in limited Internet access and computer literacy leaving thousands unable to report electronically much less meet the work mandate. No matter. People are purged from the rolls regardless and that is the intent. Dismantle or privatiz

The elections left little doubt that universal healthcare remains an unmet necessity. From passage of Medicaid expansion referendums in three ‘red states’ to candidates running with the South as the testing ground for reaction.

Government funds now account for more than 50% of private insurance revenues. Whether it’s private MedicareAdvantage Plans; restrictive private Medicaid managed care plans; subsidization of the commercial insurance market with Affordable Care Act; or the quickening to privatize the venerable Veterans Administration (VA) System, the entrenchment of corporate healthcare endangers lives through disruptive fragmentation, costly commodification of care and the exclusion of huge swaths of the working class, especially immigrants and the undocumented.

The days when 80% of the insured were covered by employment-based health insurance as a necessary part of the cost of labor productivity are dying. Only 50% of workers get insurance from the job and the majority of those face unaffordable deductibles and risky health ‘savings’ plans.

Medicaid and the VA system cover the most vulnerable and dispossessed section of the working class and are in the crosshairs of the assault. The Trump administration is counting on keeping these combined 83 million isolated from the rest of the working class.

The elections were a wake-up call that this strategy is waning.

The bombastic and highly visible attempts in Congress to repeal the flawed ACA, and with it the Medicaid expansion resulted in millions hitting the streets in protest. Federal legislative efforts collapsed, replaced by regulatory stealth and secrecy as a weapon of the billionaires and corporations.

Medicaid is a thread bear lifeline to healthcare access. It’s not in defense of Medicaid’s legendary weaknesses that the fight to expand and protect it is being waged. Rather, it is driven by very real working class need coupled with growing social awareness that the government is the only entity with the power to guarantee healthcare for all.

Active defense of publically funded healthcare is vital to the class unity necessary to go on the offensive for Single Payer and a fully public, accountable, and comprehensive system of healthcare for all!