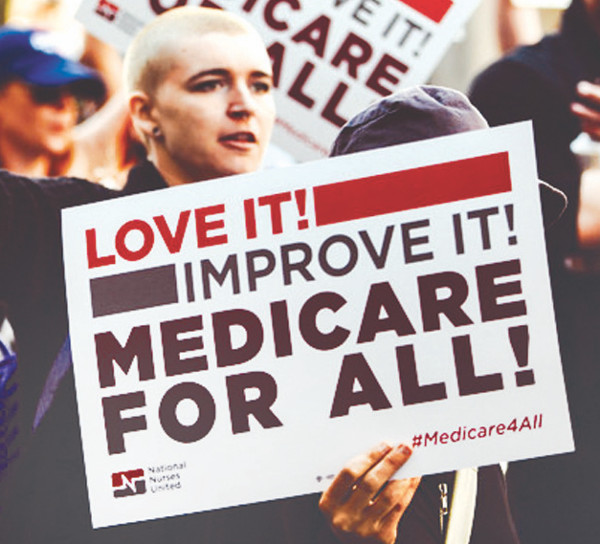 Look out! They’re trying to steal your healthcare again! Just before Christmas a Texas federal judge ruled that the entire Affordable Care Act is unconstitutional because last year Congress ended the requirement that people buy health insurance. It’s a murderous ruling that threatens health coverage for more than 20 million people, roughly half of whom got health insurance through states that expanded Medicaid.

What’s gonna happen to people? This is the most sweeping assault on the ACA so far. Various studies predict 44,000 more deaths a year if 20 million people lose their health insurance, 52,000 deaths if pre-existing conditions don’t have to be covered, and premium increases of roughly $1,500 annually. The ruling could return healthcare to the pre-ACA landscape of a multi-trillion-dollar industry that left people dying for lack of care, with exclusions for pre-existing conditions, unlimited out of pocket costs, caps on lifetime coverage, no safeguards for essential benefits like mental health or emergency room care and loss of employment-based health insurance. It’s government serving the rich and failing the people.

The ACA was never a solution to the healthcare crisis. It was designed to stabilize the profits of the private insurance market through federal subsidies. But its expansion of Medicaid to nearly 10 million people, covering youth on parents’ health insurance up to age 26, requiring most employers to offer insurance, and prohibiting exclusions for pre-existing conditions offered millions a way to seek care they could not afford previously. The Texas ruling promotes chaos, confusion, conflict, fear and loathing that characterizes the collapsing ability of capitalism to maintain social peace and security. Health care corporations with their Wall Street bosses do not care who dies as long as they make profits. Already 47% of the 27 million still uninsured say they just can’t afford the cost. Pundits and Democrats tell us “not to worry,” or “nothing will change” for ACA enrollees in 2019, false claims that serve the interests of the corporations. But the damage to the lives of people who depend on the thin strands of Medicaid or ACA insurance exchanges is already growing with high anxiety and a life-threatening sense of insecurity.

We need a truly universal, comprehensive system of healthcare that eliminates the private health insurance morass. What about an improved Medicare; government-guaranteed single payer public health care for all. Covering all healthcare needs through public funding for the public’s health would be cheaper and better than our current system of public funding for private wealth of insurers, hospital chains, drug companies and other corporate parasites profiting from our illnesses.

Healthcare is a human right that should be based on need, not profit. We need comprehensive, high quality healthcare for all. We need unity among all those who must fight for healthcare to stay alive—those on Medicaid or Long Term Care, the disabled, the retired, part timers, low wage earners, the marginalized—and the dispossessed. Single Payer advocates together with the dispossessed could become a powerful social force to win Medicare 4 All with Everybody In and Nobody Out!