As this issue of the People’s Tribune goes to press, a caravan of 7,000 Central American men, women and children is in Tijuana, Mexico, seeking asylum in the U.S. They are hungry and exhausted. Some are sick. They are being kept in miserable conditions, surrounded by Mexican soldiers and police south of the border, and confronted by U.S. soldiers and police north of the line. But of necessity they are hopeful and determined to reach the U.S.

While the Trump administration has labeled these people criminals, hundreds of Americans are going to the border to show solidarity with the migrants and to donate things, food, services and money. Sister demonstrations are taking place across the country. 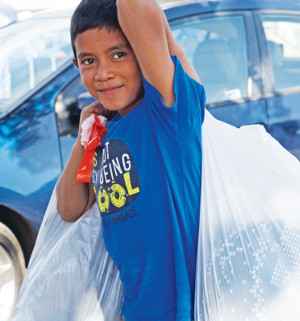 Refugees at a shelter in Tijuana.
PHOTOS/MARGARITO DIAZ

Under the slogan “Love knows no borders,” U.S. faith-based groups led a demonstration at the border near San Diego in December, calling for demilitarizing the border, protecting the right to migrate and seek asylum, and an end to detaining and deporting migrants and refugees. One demonstrator, Rev. Traci Blackmon of the United Church of Christ said, “The ostracization of people, of any people, is sinful. … The same breath of God that breathed into me, breathed into those that are trying to cross this border, breathed into our ancestors. And it is atrocious that we as a people, who pronounce ourselves to be the nation of plenty, would treat people inhumanely.”

U.S. corporations for years have exploited Latin American labor and resources, imposing poverty south of the border in order to funnel wealth into this country. To keep the money flowing, the U.S. government has a long, ugly history of helping to impose and maintain dictatorships, the drug trade, and gang violence in Latin America.

According to Doctors Without Borders, “Every year, an estimated 500,000 people flee extreme violence and poverty in El Salvador, Guatemala, and Honduras and head north through Mexico to find safety. The high levels of violence in the region … are comparable to that in war zones.” 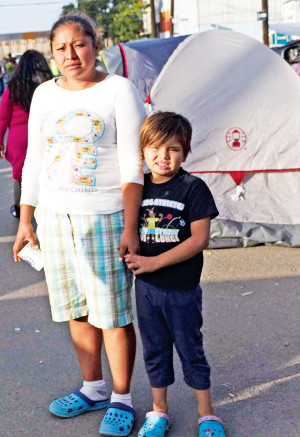 Refugees at a shelter in Tijuana.
PHOTOS/MARGARITO DIAZ

Meanwhile, the billionaires and corporations who rape Central America are raping us in this country. Automation and globalization have wiped out millions of jobs in the U.S., and the corporate government’s response has been fat tax breaks for the rich and cuts in public programs the workers need to survive. We see millions in poverty, homeless, and without health care; thousands dying daily from drug overdoses; millions in prison; people living in fear of trigger-happy cops; and the gun and drug-related violence that plagues our cities.

The billionaires need to impose a fascist dictatorship in this country and throughout the Americas to protect their hold on power from those who suffer. The billionaires’ worst fear is that the common people of the Americas will join hands across borders and demand a world that serves the people’s needs. The real reason for Trump’s border wall, the barbed wire and soldiers, is to keep the people from uniting.

GM, which plans to lay off 15,000 workers in the U.S. and Canada, said last summer it would build a new line of trucks in Mexico. Why are the corporations free to migrate for profit, but when workers migrate for survival they are met with tear gas and troops? Will the world’s abundance be shared by all the people, or benefit only the wealthy? Will the world be run for the people, or for the corporations and billionaires? This is the question that confronts us at the border.

The caravan: questions and answers