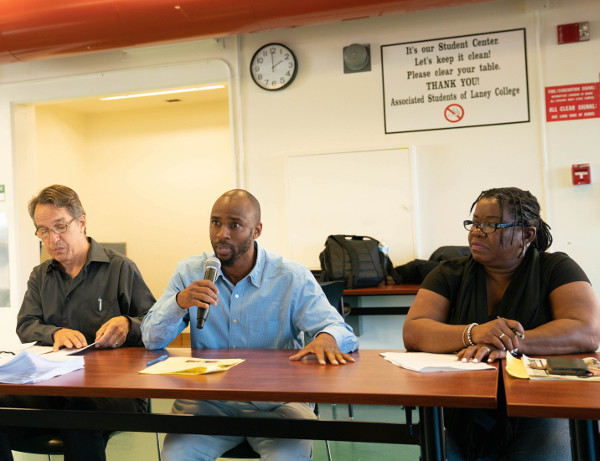 OAKLAND, CA — “There’s only one place in America anybody is guaranteed a roof over their head, and that’s in prison,” said Oakland community leader John Jones III when he spoke at the new Poor People’s Campaign teach-in Oct. 30 at the Student Center.

A myriad of entangled issues became exposed behind the problems of housing insecurity at the event, which featured a variety of speakers addressing the 50 or so students and faculty in attendance.

Many of the speakers have, like Jones, experienced living through underlying issues that cause housing insecurities, such as navigating society after being released from prison or attending school while working several jobs while still not having enough money for rent.

Keynote speaker and San Jose anti-poverty leader Sandy Perry said there are an estimated 7,000 homeless people in Oakland, but that number may not represent the entirety of the issue.

“We don’t know the number of people couch-surfing. Many people are too ashamed and embarrassed to talk about it,” he said. “[7,000] is just the official number, and, we believe, not the full number.”

Jones was paroled six years ago, he said. Despite having a license to become an aircraft mechanic, he was homeless and unemployed for 18 months. He spent an entire year in a one-room shack with 10 people and no running water.

“If someone said I’m going to charge you to breathe air,” he said, “what would be your reaction? We already buy water. Why does rent exist? Everyone has a right to shelter.” He suggested the simple solution of public-owned housing where no one pays rent.

“If your city is only giving you the minimum rights that the state allows, you have virtually no protection,” said panelist and Political Science instructor Andrea Slater. “We are the system. We are not outside.”

Laney English professor Roger Porter started the Homeless Student Support group. He said his inspiration to start the support group happened when, every semester, some students say they are living out of their cars and are housing-insecure.

“As the black population in Oakland has been cut in half,” he said, “the homeless population is upwards of 70 percent.”

Recently retired Laney instructor Peter Brown helps organize with the new Poor People’s Campaign committee. He was part of the “More Cuts to Social Programs Panel” and said that everyone should think of themselves as teachers. All it takes to be a good teacher is to be a good student who studies their surroundings.

“When we understand the mechanisms at work in a process,” he said, “then we aren’t victims of that process anymore—we’re participants.”

This generation is a transformational one, he said, and nothing but a total change in the public system will do.

This article was originally published in the Laney Tower November 8, 2018 outside, but hell, you would be a lot more helpful if you showed up with a thousand jobs instead of a thousand sandwiches.

I told a cop the other day all the Amendments to the Constitution he was violating. You are breaking several of them when you come to a homeless person and tell them ‘you have to remove your house’ from a little plot on a public square.