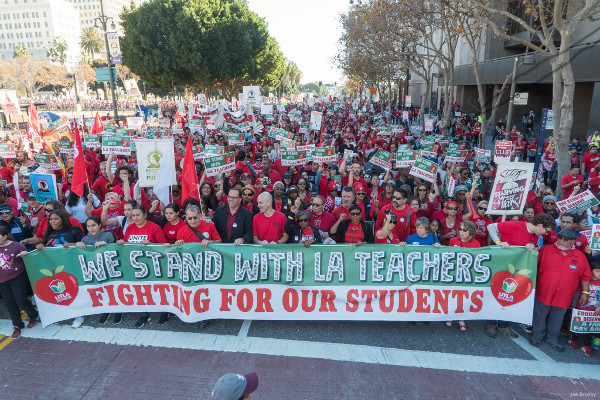 Los Angeles is the second largest school district after New York City. It has the greatest number of undocumented students in the US. The city has more residents from Mexico than any city in Mexico, except for Mexico City. Los Angeles is part of a unified economic region tied to a globalized border zone. Schools often have 40 per class and little classroom support.

On both sides of the border, in California, Arizona, Texas, private corporations make vast profits by jailing or exploiting undocumented children. These corporations refer to these prisoners as their “inventory.” When corporations profit from jailing undocumented students, can we expect that they will adequately educate the same students—or any other child? The result of the invasion of corporate private property into the public realm is disastrous.

A major question is why is this happening in California, where the state’s economy is the 5th largest in the world? The ever-increasing expansion of robots in production means less demand for educated workers. Hence capitalism intends to transform public education.

The portfolio plan is to replace the authority of school boards with private educational management companies. Corporate profit expects to thrive on what is in effect a national system of two-tiered education. Privilege for the rich: small classes, advanced curricula subsidized by the public. Subjugation for the rest: large classes, narrow curricula, and for-profit online programs.

Privatization is the real problem and the LAUSD (Los Angeles Unified School District) is a goldmine for these hedge fund managers. Austin Beutner (superintendent of the LAUSD) has hired Mercury Public Affairs, the same company that helped Flint, Michigan spin the story of poisoning the entire community. Beutner threatens to bankrupt the entire school district by 2020 and sell it off piece-by-piece. There is no middle ground between corporate interests and human needs. One or the other will win.

We need to challenge the right of corporations to profit from education, and their right to have any say at all in public education. Education is an act of sharing between human beings. It is not for sale. Any attempt to break-up LA schools must be opposed. This issue impinges on and defines the strike and its goals. Every contract issue, every community issue, is affected by this assault of privatization.

The battle against portfolio schools affects every school district and will continue nationally after the UTLA strike is over.