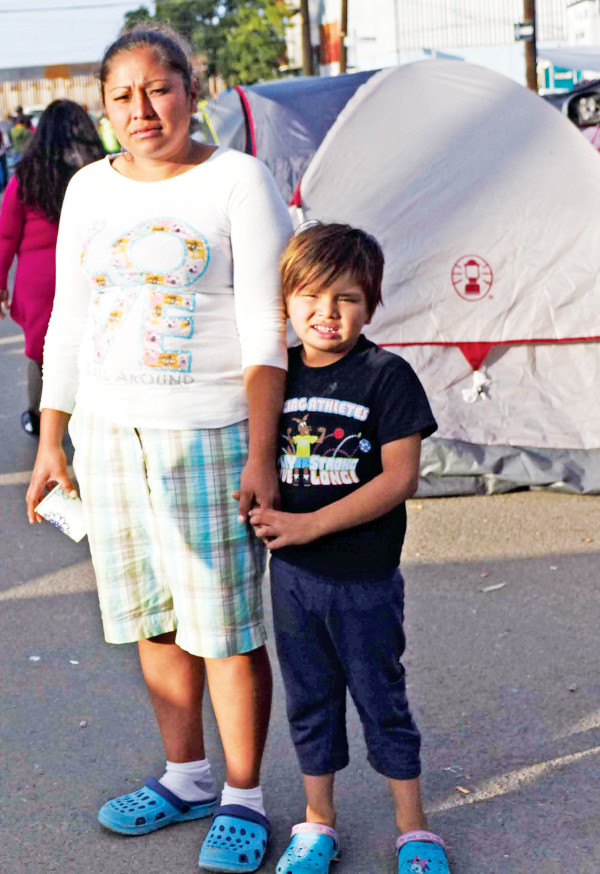 Refugees at a shelter in Tijuana.
Photo//MARGARITO DIAZ

In light of all the recent misinformation that has been flooding the corporate airwaves concerning the caravan that has arrived at our southern border, let’s have a look at some facts and connect a few dots.

“Why don’t immigrants come here legally?”
Long before the caravan was anywhere near the U.S., this question was erroneously being posed as if asylum could be sought for in their country of origin or somewhere along the way. The fact is, according to U.S. immigration law, asylum in the U.S. must be sought for in person either inside the United States or at a port of entry. By asking to apply at the San Ysidro Port of entry, the caravan has begun the process legally. Ahead, they face status interviews, court proceedings many without legal counsel, their personal belongings confiscated—including evidence that would support their case which could be lost or misplaced, detention in jail like conditions, wives separated from husbands, children separated from parents, with little access to food, water, medical attention or sanitary facilities. This is a human rights nightmare that should not happen in any country that calls itself free.

“Are immigrants taking our jobs?”
The recently announced GM plant closings over the Thanksgiving holiday in Detroit/Hamtramck, Lordstown, OH and other locations clearly demonstrates that our jobs are being lost to globalization and automation. To add insult to injury, this is happening after numerous bailouts, subsidies and recent tax breaks were given to GM in order to keep the plants open. No other industry has replaced as many workers with automation as the auto industry. To blame this on immigrant workers who are merely trying to survive, is to shift blame from where it truly belongs, i.e., on capitalism and its corporate lust for maximum profits. Just like many of the refugees and asylum-seekers in the caravan, we don’t seem to matter either.

“Did the government really need to send troops to the border?”
The current administration in Washington, D.C., has characterized the women, children and families that make up the caravan seeking asylum at the border as an “invasion” of “bad hombres” and “criminals” in order to justify sending in troops. This political stunt meant to influence the midterm elections, has failed miserably and is costing the American taxpayers an estimated hundreds of millions of dollars. Wouldn’t that money be better spent on housing the homeless, educating our children and providing healthcare for all Americans?

Speakers for a New America presents:
Speakers who recently returned from the border to express their solidarity with the Caravan, the community organizations, deported vets, and others are available to speak.
Contact us at 800-691-6888 or email info@speakersforanewamerica.com

“Voices from the Border”

Donate for a special edition of the People’s Tribune and Tribuno del Pueblo!
In this upcoming issue, we will carry the voices of the migrants and interviews of the heroines and heroes who are waging an exemplary example of solidarity with these international workers displaced by U.S. politics. Won’t you donate today?

Child’s death at the border compels us to act