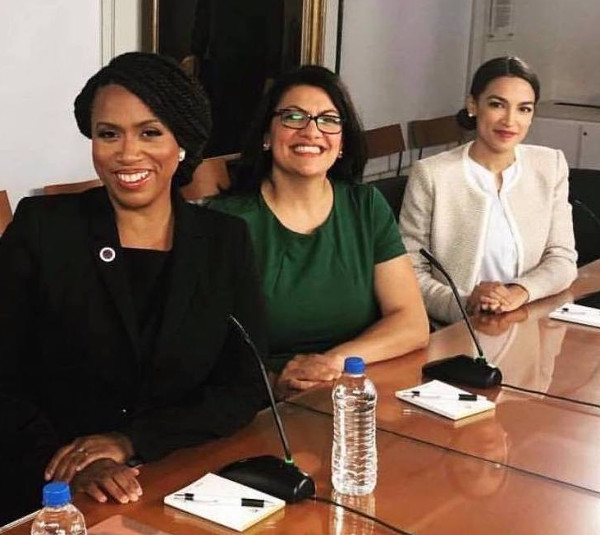 In office or not, 2018’s candidates vow to move the fight forward in 2019 and beyond

Editor’s note: Opponents of an illegal bid by Wisconsin Republican legislators to keep power rally outside the State Capitol in Madison in December. Using the lame duck period, the governor has signed legislation that aims to prevent the new governor from carrying out a campaign promise to withdraw the state from a lawsuit challenging Obamacare. Unprecedented last-ditch dirty tricks to diminish the power of incoming officials are also taking place in Michigan and North Carolina. In Michigan, they are gutting the Michigan minimum wage and sick leave measures and efforts are underway to jeopardize the fight for justice in Flint, environmental protection, water infrastructure upgrades and more. In North Carolina legislators are using the lame duck process to add new barriers to voting, as well as limiting the governor’s power to appoint a state school board. Clearly, all of these unprecedented actions aim to insure profits for businesses and corporations. These illegal maneuverings subvert the voters’ will and the little democracy left. However, people aren’t going for it… the fight is on.

“This is not a speech of concession because concession means to acknowledge an action is right, true, or proper. As a woman of conscience and faith, I cannot concede that.”

Those forthright words—spoken on Nov. 16 by Stacey Abrams, candidate for governor of Georgia—typified the defiant stance taken by progressive candidates after the 2018 election. Whether placed in office or not, candidates who had expressed the concerns of working-class voters vowed to continue to build a movement for change—in 2019 and beyond.

“I acknowledge that former [Georgia] Secretary of State Brian Kemp will be certified the victor in the 2018 gubernatorial election,” Abrams said in her speech. “But to watch an elected official, who claims to represent the people in the state, baldly pin his hopes for election on the suppression of the people’s democratic right to vote has been truly appalling.”

Abrams announced a major lawsuit against the state of Georgia for voter suppression and promised to continue fighting around the issues. 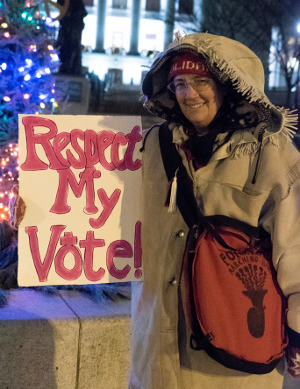 Texas gubernatorial candidate Beto O’Rourke sounded a similar note when he addressed supporters at an emotional gathering in El Paso on election night.

O’Rourke spoke passionately of his immense pride in “everyone who knocked on doors, everyone who made phone calls, everyone who allowed themselves to hope and believe, to be inspired by one another and to turn it into action and into votes, and to do something no one thought was possible—to build a campaign like this one: solely comprised of people from all walks of life, coming together, deciding what unites us is far stronger than the color of our skin, how many generations we can count ourselves an American, or whether we just got here yesterday, who we love, who we pray to, whether we pray at all, who we voted for last time—none of it matters.”

“This team of which we are all members in some way is going to stay together,” O’Rourke promised. “We will see you down the road!” 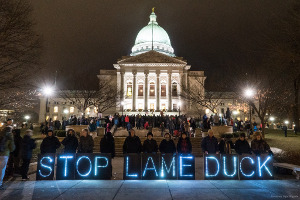 Opponents of an illegal bid by Wisconsin Republican legislators to keep power rally outside the State Capitol in Madison in December.
Photo/Joe Brusky, MTEA

“I have no intention of delivering a victory speech,” Ayanna Pressley told cheering supporters in Massachusetts after winning election to the U.S. Congress. “What I am offering is a vision”—a vision of “breaking the cycle of poverty” and an economy where “one job is enough” to live on.

In New York City, Alexandria Ocasio-Cortez spoke to cheering supporters on election night after being elected to Congress. She urged people to put any losses by progressive candidates in perspective. “We will never be ashamed of having a short-term loss” in order to gain victory in the long term for what is right, she declared.

“These struggles that we are taking on are generational,” Ocasio-Cortez pointed out. “It will take our whole lives,” she warned, but these struggles are struggles “for our lives.”

Her sum-up of Election Day:

“Today is a milestone, but it is really a beginning. We have to keep organizing. We cannot stop. Electoral politics is just a tool in a larger toolbox of this movement.”