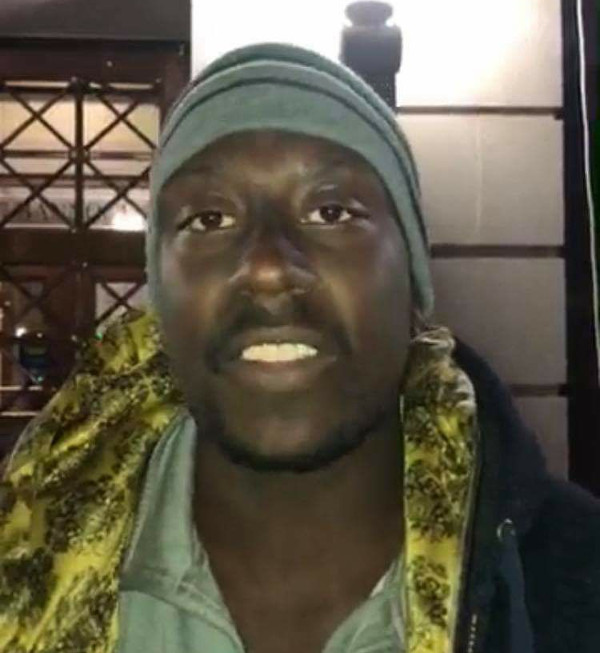 Frederick Jackson talks about his experiences being homeless in Denver, CO, and why he is protesting anti-lodging laws.
PHOTO/PJ DAMICO

Editor’s note: This is from a video interview of Frederick Jackson, by Pj Damico, on the occasion of a sleepover on Thanksgiving eve at the Denver city and county building in front of the mayor’s office, by members of Denver Out Loud, protesting the raids on homeless encampments and criminalization of the homeless.

Everybody has heard the phrase ‘crap rolls downhill.’ Well, when you’ve got people crapping on the top, it’s not just rolling down the hill, it’s going straight to the bottom. You’ve got women who can’t be safe anymore cause they keep separating us up. My wife and I have 30-40 street kids who are street orphans, just like I was before. I work 40 hours a week for a temp service, if I can get there. If my wife can’t watch my stuff cause she has an appointment we don’t get to make no money. It’s just this crazy cycle that tears families apart. They’ve made all homeless people into criminals, but homeless people are the ones who won’t go steal, won’t go kill, who won’t destroy things just to make ends meet today.

If I met with [Mayor] Michael Hancock today I’d say, Michael, remember four years ago when you came down to the Mission and you acted like you were homeless people’s best friend? You’ve been making a pony show for the last three years, and now the BID [Business Improvement District] people are just happy to see us harassed.

I’m fighting for my marriage because it’s hard for me to provide for my wife. She’s got cancer, it’s hard to keep her well. To keep her warm’s a struggle. We take care of those gutter kids, and these old people every day, because it’s what our heart shows us to do. Love matters, money doesn’t matter. People are sitting up glorifying money when it’s the builder who should be glorified, not the spender. We are under one rule: that is, do right by each other. When governments break that rule, what happens is you get your infrastructure crumbling and a world full of enemies.

When we’re all together we’re taking care of each other. We do need a little help from the outside, but hell, you would be a lot more helpful if you showed up with a thousand jobs instead of a thousand sandwiches.

I told a cop the other day all the Amendments to the Constitution he was violating. You are breaking several of them when you come to a homeless person and tell them ‘you have to remove your house’ from a little plot on a public square.

One thought on “‘When we’re all together’”